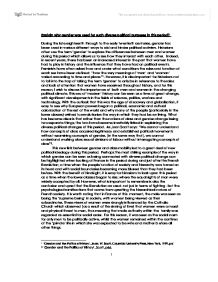 Explain why gender was used for such diverse political purposes in this period? During the late eighteenth through to the early twentieth centuries, gender has been used in various different ways to aid and hinder political activism. Historians often use the term 'gender' to explore the differences between men and women during this period which allows us to see how they interact with each other. Indeed, in recent years, there has been an increased interest in the part that women have had to play in history and the influence that they have had on political events. Feminists have often asked how and under what conditions the roles and function of each sex have been defined: "how the very meanings of 'man' and 'woman' varied according to time and place"1. However, it is also important for historians not to fall into the trap of taking the term 'gender' to only be in reference to the roles and lack of attention that women have received throughout history, and for this reason, I wish to discuss the importance of both men and women in the changing political climate. This era of 'modern' history can be seen as a time of great change, with significant developments in the fields of science, politics, warfare and technology. ...read more.

The execution of Louis XVI led to uncertainty amongst the revolutionaries as to the natural social order. As Lynn Hunt questions; "if absolutism had rested on the model of patriarchal authority, then wouldn't the destruction of absolutism depend on the destruction of patriarchy?"5. The question of how far the moderation of paternal authority should go led to further questions on whether this would make every member of the family equal? Unsurprisingly reason most enlightened thinkers turned to the answers that Rousseau would give them in that "fathers' authority ends when the child no longer needs him. Beyond that moment, they become equals."6 Alternatively, even though this period placed a great deal of emphasis on the political role of man in society, there began an emergence of interest in the role that women would have to play. After the traumatic experience of the French Revolution, the family was idealized by the bourgeoisie as a place of emotional and psychological refuge. In this environment of bourgeois ideals, the mother became the moral and emotional centre of the family, as it was she who instilled values into her children and exercised a moral influence over her husband. ...read more.

This contemporary view that women were an immoral influence over men often led to the idea that they should be ostracised from politics as their main duties were to be wife and mother. When looking at the roles of femininity in society, historians can often become confused due to the conflicting viewpoints of the day. In France, women were celebrated as the "muse and Madonna of society"16 even though she was politically a non-person. Indeed the very notion of 'Libertie' was personified in a vulnerable feminine form, which conflicted with the Church's teachings that woman was responsible for the downfall of man. Originating from the same teachings, it was clear that masculinity was to be celebrated in the patriarchal society where the man was the head of the household, thus making him the only member of a gendered society who was able to be politically active. In these terms, men were the only members of society that were seen as rational and thus able to make important political decisions. They often used their masculinity to attack each other and viewed femininity purely in masculine terms; as something to both be defended and shunned at will. ...read more.