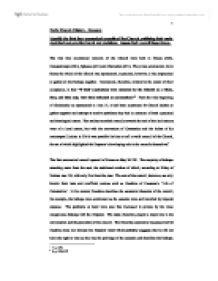 Identify the first four ecumenical councils of the Church, outlining their main doctrinal and practical work and decisions. Assess their overall importance.

Early Church History - Honours Identify the first four ecumenical councils of the Church, outlining their main doctrinal and practical work and decisions. Assess their overall importance. The first four ecumenical councils of the Church were held in Nicaea (325), Constantinople (381), Ephesus (431) and Chalcedon (451). They were ecumenical, for in theory the whole of the Church was represented, in practice, however, it was impractical to gather all the bishops together. Ecumenical, therefore, referred to the extent of their acceptance, in that: "If their conclusions were endorsed by the Church as a whole, then, and then only, were they reckoned as oecumenical."1 From the very beginning of Christianity as represented in Acts 15, it had been customary for Church leaders to gather together and attempt to resolve problems they had in common of both a practical and theological nature. The earliest recorded councils towards the end of the 2nd century were of a local nature, but with the conversion of Constantine and the defeat of his counterpart Licinius in 324 it was possible for him to call a world council of the Church, the act of which highlighted the Emperor's developing role in the councils themselves.2 The first ecumenical council opened in Nicaea on May 20 325. The majority of bishops attending came from the east, the traditional number of which, according to Hilary of Poitiers was 318, with only five from the west. The acts of the council, however, are only known from later and unofficial sources such as Eusebius of Ceasarea's 'Life of Constantine'. In his recount Eusebius describes the senatorial character of the council, for example, the bishops were summoned as the senators were and travelled by imperial expense. The problems at hand were also first discussed in private by the most conspicuous bishops with the Emperor. The latter, therefore, played a major role in the convocation and the procedure of the council. ...read more.

These bishops might also succeed their catholic counterparts through election, although the bishop of Alexandria had to install him and this regulation is reflected in canon 6 where it states18: "If anyone become a bishop without the consent of the metropolitan, the great council decrees that such a person is not even a bishop."19 The Council of Niceae did not solve the theological problems but in stead was the starting point of conflict which was to span half a century, and this was reflected in the Councils which followed it.20 The Council of Constantinople called by Theodosius in 381 was not considered ecumenical due to its dogmatic pronouncements on the Holy Ghost until Chaceldon in 451, and information regarding it is even more scarce than that of Nicea. It opened in May and was attended by around 150 bishops all of which came from the east.21 The main tasks of the council were of a theological nature and embodied in the first of the Councils four authentic canons the faith of Nicea is reaffirmed emphasising the eventual triumph over Arianism achieved just before the opening of the council: "That the faith of the 318 Fathers who assembled at Nicea in Bithynia is not to be made void, but shall continue established..." 22 The main theological task of the council was the affirmation of the full divine nature of the Holy Spirit, against an outcrop of Arianism called Pneumatmachians or Macedonians after its founder Macedonius bishop of Constantinople. The Macedonians argued based on the evidence of Scripture that the Holy Spirit was not God nor a creature for it is indicates the Holy Spirit is inferior to both the Father and the Son and that there is no evidence for its divinity.23 Under the presidency of Gregory of Nazianzus the newly elected bishop of Constantinople the doctrine of the Holy Ghost was discussed and attempts were made to convince the Macedonians to the error of their ways, however, this did not succeed for Eleusius of ...read more.