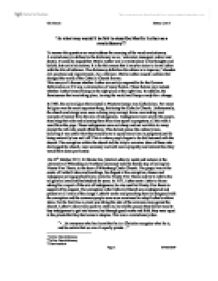 In what way would it be fair to describe Martin Luther as a revolutionary(TM)?

‘ In what way would it be fair to describe Martin Luther as a revolutionary’?

To answer this question we must address the meaning of the word revolutionary.

A revolutionary is defined in the dictionary as an; [1]extremist; insurgent; radical and drastic. It could be argued that Martin Luther was a revolutionary in his thoughts and beliefs, but not in his actions. It is for this reason that it may be easier to leave Luther with the title of reformer. The dictionary definition for reform is to improve;[2] abandon evil practices and improvement. As a reformer, Martin Luther caused a schism that changed the world of the Catholic Church forever.

This essay will discuss whether Luther was solely responsible for the German Reformation or if it was a culmination of many factors. These factors may include whether Luther himself being in the right place at the right time. In addition, the Renaissance that was taking place, leaving the world and Europe ready for a change.

In 1500, the only religion that existed in Western Europe was Catholicism. For many

Religion was the most important thing, this being the Catholic Church. Unfortunately, the church and clergy were seen as being very corrupt, Rome was making vast amounts of money from the sale of indulgences.  Indulgences were sold to the people, absolving their sins and releasing them from time spent in purgatory, all this with a word from the pope. These indulgences were not cheap and not available to many except the rich who could afford them. This did not please the ordinary man, believing it was unfair that they would have to spend more time in purgatory just for being materially less well off. This is where people began to be disillusioned with the church. The corruption within the church led the laity to examine ideas of those who challenged the church, more seriously and with more sympathy and interest than they would have done previously.

On 31st October 1517, All Saints Eve, Martin Luther (a monk and lecturer at the University of Wittenburg in Northern Germany) took the fateful step of nailing his Ninety-Five Thesis, to the door of Wittenburg Castle Church. The gospel was at the centre of Luther's ideas and teachings, his disgust at the corruption, abuses and indulgence selling sparked him to write his Ninety-Five Thesis and try to reform the religion he loved and had studied for years. In 1517, Luther sent a letter to Rome asking for a repeal of the sale of indulgences, he also sent his Ninety-Five thesis in support of his request. The corruption in the Catholic Church was widespread and present at all levels of the clergy. Luther's works and preaching heavily disagreed with the corruption and the common people were soon convinced to adopt Luther's reform ideas. For the first time a priest was taking the side of the common man against the church. Luther’s ideas were quick to catch on, he told the people they did not need to buy indulgences to get into heaven, but through good works and faith, they were equal to the priests that they had come to despise. This was a revolutionary idea.

[3] “…let everyman who has learnt that he is a Christian recognise what he is, and be certain that we are all equally priests…”

The church wanted to silence Luther but as he had gained much support, they had to be careful in the way they went about it.He was summoned to Rome to defend his Ninety-Five thesis, but refused to go. At a disputation in Leipzig, (1519) Luther denied papal primacy, the tradition of the church and the infallibility of councils. After his break with Rome, an order for the destruction of his books was issued. In 1521, he was summoned to appear before the Diet at Worms, and was put under the ban of the Empire by Charles V.During the hearing of the Diet, Luther said,

[4]"Unless I am convicted by Scripture and plain reason-- I do not accept the    authority of popes and councils, for they have contradicted each other-- my conscience is captive to the Word of God. I cannot and I will not recant anything, for to go against conscience is neither right nor safe. God help me."

Luther was excommunicated but could have been burnt at the stake branded and a heretic. The Papacy may have decided not to kill Luther, as this would have made him into a martyr, making him more popular. Luther's attack on the Catholic Hierarchy brought the clergy to the same level as the ordinary people, and as can be imagined, this was very popular amongst them. However, Luther was not the first person to hold these revolutionary ideas, before him many Christian humanists had put forward similar ideas and, in particular, Desiderius Erasmus. Just over ten years before Luther printed his pamphlets, Erasmus had written a number of works criticising the Church and its ways.

Desiderius Erasmus was born in Rotterdam, The Netherlands. After six years in an Augustinian monastery, he became a priest. He went to Paris, then moved to England in 1498, and became professor of divinity and of Greek at Cambridge. Erasmus' writings rank him as one of the greatest scholars of his time. His masterpiece, 'Colloquia' - a critical text about Church abuses - appeared in 1519. He criticized with witty satire the ignorance of the clergy, and their over-reliance on ceremonies, and their neglect of charity and the study of the Bible. Although he did not attack the teachings of the Church, but tried to arouse interest in Church reform. Erasmus differed from Luther because Luther was attacking the actual dogma of the Catholic Church. It could be said, [5]“Erasmus laid the egg that Luther hatched”

The time that Luther decided to voice his opinions was important, it was a time of a growing sense of German nationalism, and one of the most noted events in history was taking place, that of the Renaissance. The Renaissance began in Italy during the fifteenth and sixteenth centuries It later spread throughout Europe and began a rediscovery of classical thoughts and influenced painters, such as Raphael and Michelangelo, sculptors such as Donatello and writers, such as Johann Reuchlin, Ulrich Von Hutten and Desiderius Erasmus. The Renaissance influenced the re-examination of ideas and beliefs and created men who were willing to challenge basic beliefs of the church. Humanism, the study of humanities, placed an emphasis on man and his secular interests and the main influence of the Renaissance and humanism was a return to original texts. this encouraged literate men to study texts of the bible and make their own interpretations, instead of those offered by the Roman Catholic Church.

Humanism also bought a desire for knowledge and the invention of the printing press. This had opened many people's minds, starting a newer more lateral way of viewing the world. The Renaissance promoted individuals to think for themselves, to form their own opinions, something very different from the medieval system, which predated the sixteenth century. This was a time when scientific breakthroughs and education began to emerge in much higher numbers. The greatest breakthrough was most probably the invention of the movable type printing press, invented by Guttenberg in Mainz. This invention was instrumental in the success of the reformation. For the first time, ideas could be mass-produced and distributed to the public, allowing a dissemination of information this meant that lay people could now read the bible, understand it and make their own judgement upon the Catholic beliefs.The printing press played a huge part in starting and continuing the reformation . The printing press was not only used to produce copies of Luther's translation of the Bible and his various works, but also to manufacture propaganda against the Catholic Church and their dealings. Posters and notices were erected to advertise the sermons and rallies of Luther and his followers and pamphlets were aimed at gaining popular support amongst the literate. Luther described the printing press as [6]"God's highest and extremest act of grace" and there is no question as to why when you see how much influence the printing press had on the Reformation. Luther's Ninety-five thesis was translated into German and circulated everywhere, flooding the people with these new radical ideas. Luther was in the right place at the right time.

In the Holy Roman Empire, anti-papalism was widespread and Luther's attack on the papacy and the Catholic Church had reached a receptive audience, those who were literate preferred the focus upon the individual and personal interpretations of the bible.In 'Address to the Christian Nobility of the German Nation' (1520), Luther made a direct appeal to the secular leaders of the German Nation. Luther urged them to reform their churches, as the church was incapable of doing so. The secular leaders had their own reasons for finding Luther's message appealing. Many were influenced by their own greed, reasoning that some of the wealth and influence of the church might fall into their hands and increase their own power, and quickly saw how Lutheranism may benefit them.

By 1560 Europe had dramatically and fundamentally changed, the Renaissance had a tremendous impact upon the way in which men thought and challenged beliefs.Luther’s ideas had opened up new debates about how the church and papacy was run, his ideas certainly were revolutionary. However, Luther the man was not nor could it be said be solely responsible for the reformation. Without the increased feeling of nationalism in Germany ,support from the people, and favourable conditions at the time, Luther's ideas would not have caused such turmoil for the Roman Catholic Church. Therefore it would be unfair to call Luther a revolutionary.