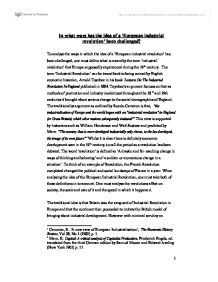 In what ways has the idea of a European industrial revolution been challenged?

In what ways has the idea of a 'European industrial revolution' been challenged? To analyse the ways in which the idea of a 'European industrial revolution' has been challenged, one must define what is meant by the term 'industrial revolution' that Europe supposedly experienced during the 19th century. The term 'Industrial Revolution' can be traced back to being coined by English economic historian, Arnold Toynbee in his book Lectures On The Industrial Revolution In England published in 1884. Toynbee's argument focuses on that as methods of production and industry modernised throughout the 18th and 19th centuries it brought about serious change to the social demographics of England. The traditionalist argument as outlined by Rondo Cameron is that, "the industrialisation of Europe and the world began with an "industrial revolution" in England (or Great Britain) which other nations subsequently imitated"1 This view is supported by historians such as William Henderson and Walt Rostow and predicted by Marx: "The country that is more developed industrially only shows, to the less developed, the image of its own future"2 Whilst it is clear there is definitely economic development seen in the 19th century, to call the period as a revolution has been debated. The word 'revolution' is defined as 'A drastic and far-reaching change in ways of thinking and behaving' and 'a sudden or momentous change in a situation'. To think of an example of Revolution, the French Revolution completed changed the political and social landscape of France in a year. ...read more.

Toynbee dates the revolution to have taken place between 1760-18209 in Britain whereas John Nef, a revisionist argues the industrial revolution was "false" but accepted there where increases in industrial production in the late 18th century10 but not significant enough for it to be considered a revolution. Thomas Ashton states "The changes were not merely 'industrial', but also social and intellectual. The word 'revolution' implies a suddenness of change that is not, in fact, characteristic of economic processes. The system of human relationships that is sometimes called capitalism had its origins long before 1760, and attained its full development long after 1830: there is danger of overlooking the essential fact of continuity."11 Aston's view is backed up by the fact Belgium obtained a steam pump in 1720 and its influences lasted over a century. The traditional understanding of the Industrial Revolution is that it was a wide spread revolution that covered the whole of Europe. However revisionist historian Michael Palairet presents the argument that some economies during this period suffered from economic decline as apposed to economic growth. He comments on the Balkan stares that urban decline, retardive supply side influences, widespread peasant agriculture and introduction of state government post ottoman empire led to a decline in all of the Balkan economies. 12 Whereas a state was supposedly good for economic development as could address infrastructure issues, and promote education and industry this was not the case in the Balkans. ...read more.

Industrial development was arguably not a Europe spread phenomena; it was very much based upon what natural sources where available. Whilst in can be agreed there were certainly similarities between countries that experienced economic growth in this period, most notably Belgium and Great Britain coincidently the two nations that historians agreed where industrialised first. However these similarities do not take in to account the variation of the different models, speed and scale of industrialisation across Europe. There is also debate over how industrialised was Europe by the start of the 20th century, with industries that where over a century old still have significant impact on industrial process. Of course there is debate over only regions of certain states being industrialised so it is not accurate to apply the term to cover the whole of Europe, considering the Balkan states did not even have economic growth in this period. Rondo Cameron summarises the revisionist argument as "The customary depiction of an "industrial revolution" in Great Britain and its repetition in continental Europe and elsewhere distorts the historical record. It also conceals the distinctive varieties of industrialization, and ignores the ingenuity and achievements of the men and women who contributed to it."15 This is the essential summary of challenges to the traditional idea as one could argue the broad term European Industrial Revolution does ignore the numerous factors that show a variation within Europe. One could argue a more accurate term to describe this period is as 'further technological development and economical growth in resource rich Europe' as it better reflects the development shown in this period. ...read more.