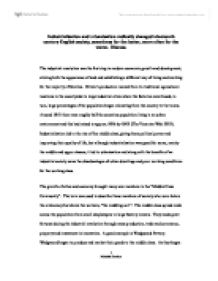 Industrialisation and urbanisation radically changed nineteenth century English society, sometimes for the better, more often for the worse. Discuss. The industrial revolution was the first step in modern economic growth and development, altering both the appearance of land and establishing a different way of living and working for the majority of families. Britain's production moved from its traditional agricultural locations in the countryside to large industrial cities where the factories were based, in turn, large percentages of the population began relocating from the country to the towns. Around 1851 there was roughly half the countries population living in an urban environment and this had raised to approx. 80% by 1900 (The Victorian Web 2003). Industrialisation led to the rise of the middle class, giving them political power and improving their quality of life, but although industrialisation was good for some, mainly the middle and upper classes, it led to urbanisation and along with the benefits of an industrial society came the disadvantages of urban dwellings and poor working conditions for the working class. The growth of cities and economy brought many new members to the "Middle Class Community". The term was used to describe those members of society who were below the aristocracy but above the workers; "the middling sort". ...read more.

With the growth of industry came a massive growth of the towns population, by 1851 approx. half of the people living in Britain lived in London. Working class Victorian families were big, usually 5 or 6 children. With so many people moving into towns, new houses had to built, but these were built quickly and cheaply. Most houses were a two up two down design and large families would have to crowd into these small rooms. These houses had no running water or toilets, which was a main factor in the streets becoming dirty and unhygienic slums as the human waste was often discarded directly onto the streets. Some streets had one or two toilets to share between them, the houses were built close together with narrow streets between them and open sewers running down the middle (The Victorian Web 2003). Peter Ackroid found that sanitation hadn't differed from that of the 15th century. In London, cesspools were underneath 200,000 homes and waste had begun to be forced upwards through the wooden floors of the poor houses. The people of the 19th century did not believe that the filth and pollution they were living in had any effect on their health; they believed that diseases were contracted via smells in the air. ...read more.

'This act was for all factories except silk mills and consisted of 5 points 1) No child under 9 to work 2) Children 9 - 12 to work only eight hours 3) Young children 13 - 18 work only 12 hours 4) Working children have two hours education a day 5) Four government inspectors to check that the law was obeyed'. This act led to many more Factory Acts including the 1844 act which led to lesser hours for women and children and dangerous machinery being fenced off. Though there was still much more that could be done, further acts in 1847, 1850 and 1853 did begin to improve things for the working class factory workers (Class handout 14/10/03). Overall, the industrial revolution has brought improvement to most aspects of industrialised societies. Urbanisation led to the growth of the cities that we live in today, through the bad living and working conditions the people had to endure, came reform acts and legislations that have improved our lives today dramatically for the better. Along with advances in industry and social conditions, there was a great improvement in health and the understanding of medicine, which has led to a longer living and ever increasing population and through the formation of governments; we have gained a more open and politically free society. Nineteenth century industrialisation and urbanisation has proved to be one of the most influential movements in our history, laying the foundation for our modern society. ...read more.