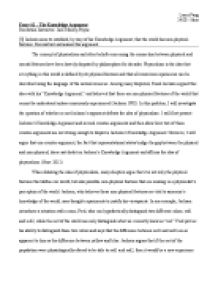 Jackson aims to establish, by way of his Knowledge Argument, that the world has non-physical features. Reconstruct and assess this argument

Churchland proceeds to discuss how musicians understand what every specific note sounds like individually and use this knowledge to put together chords using their imagination. When thought about from a ?new experience? point of view, if Mary knows how every part of the body will react to seeing color for the first time, then she can create this experience in her head much like how musicians put together chords from individual notes. The third and last counter-argument I will discuss is one proposed by Earl Conee called the ?acquaintance hypothesis.? This counter-argument is similar to the ?ability hypothesis? in the sense that both hypotheses believe that Mary did gain something after leaving the room (Conee 1994). However, unlike the ability hypothesis, the acquaintance hypothesis claims that Mary does not gain new facts or new abilities, but rather the ability to relate two epistemic understandings. This concept of being acquainted to something defends the idea of physicalism because it states that no factual knowledge is gained ? what is gained is the ability to recognize prior knowledge in a new mode of presentation. Conee states that Jackson?s assumption that Mary would gain some non-physical and factual knowledge does not hold because the only thing gained from going out of the room would be ?how to experience and acquaint oneself with the property.? Furthermore, some philosophers believe that Mary would know everything there is about the ...read more.

In comparison to Mary?s situation, after knowing everything about the color red it is impossible to say that she will learn something new from simply being presented the situation in a different fashion. Ultimately, one can think of this situation as comparing two states of mind. In the first state of mind, Mary knows everything about the color red but does not see it. In the second state of mind, Mary sees the color red and then knows everything about it. When comparing the two, Mary did not gain any physical or non-physical knowledge, but rather switches into a different state of mind without acquiring, reacquiring, or destroying any knowledge. Ultimately, the only thing that Mary acquires is knowledge of the relationship between the two states of mind and the ability to remember this relationship. In this paper, I have analysed the Knowledge Argument, which questions the concept of physicalism and states that knowledge is composed of physical and non-physical aspects. After providing several counter-arguments to the Knowledge Argument, I conclude that physicalism can be justified by viewing Mary?s situation from a relationship/acquaintance point of view. Ultimately, I do believe that the world has non-physical features, but that the non-physical is simply an avenue to understand the physical. When thought about from the viewpoint of two different states of mind, the concept of physicalism is successfully defended and that complete knowledge can be synonymous with a complete understanding of physical features and fluency in the language of natural sciences. ...read more.