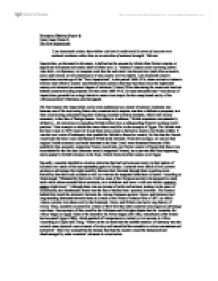 Late nineteenth century imperialism can best be understood in terms of concerns over national weakness rather than as an assertion of national strength. Discuss.

European History (Paper 1) Term Paper (Term 3) The New Imperialism 'Late nineteenth century imperialism can best be understood in terms of concerns over national weakness rather than as an assertion of national strength.' Discuss. Imperialism, as discussed in this essay, is defined as the process by which either formal empires or significant influences and control short of direct rule i.e. 'informal' empire came into being and/or were built, via diplomacy or conquest, such that the end result was the political (and often economic, social and cultural as well) dominance of one country over its empire. Late nineteenth century imperialism was the age of the "New Imperialism", in the period 1860-1914, when exclusive claims to territory and effective control 'proliferated more quickly than they had done since the eighteenth century and attracted an unusual degree of attention' (Porter) When discussing the causes and motives behind countries building empires over the years 1860-1914, we must remember that "Any theory of imperialism grounded on a single decisive cause is too simple for the complicated reality of the African partition" (Robinson and Gallagher). The first reason why imperialism can be seen understood as a matter of national weakness was because one of the motivating forces why countries built empires was due to defensive purposes, as a form of protecting and preserving their existing extended overseas interests, which were mainly economic, in the face of foreign threats. According to Anderson, "British expansion was essentially defensive...(it) aimed not at expanding British territory but at safeguarding Britain's existing world position." ...read more.

According to Porter, "The importance of economic interests and calculation in the expansion of European influence and control over the extra-European world is undeniable." The severe economic downturn in the 1880-1890s was a big blow to industrializing countries such as Britain. Great European powers, especially France and Germany, including the United States, who were amongst Britain's largest and most valuable existing markets, were becoming more and more protectionist, imposing tariffs and quotas on trade. According to Hobsbawm, "Technological development now relied on raw materials which, for reasons for climate or the hazards of geology, were to be found exclusively or profusely in remote places." Examples include gold and precious materials in South Africa. Hobson's theory of surplus capital also asserts that there was a vast amount of surplus capital seeking profitable outlets (because most of Europe's masses were poor), resulting in its owners investing outside Europe, and then to call on their governments to protect these investments by conquering and administering the territories involved. Examples of companies that had their interests outside Europe include Quaker (who go her raw material from West Africa and South America). Thus, in order to preserve economic interests, and to prevent themselves from becoming economically weak, European powers decided to colonize and exploit the economic advantages of colonies. It was this concern for economic weakness that motivated imperialism. Porter says, "Answers to these questions (why European powers decided to colonize) depend on a recognition that diplomatic exchanges often dealt in material coin, and that prestige had its economic buttresses." ...read more.

According to Porter: "Two of the powerful urges to intervene beyond Europe and to influence or control both people and territory were the religious - the desire to convert non-Christians to Christianity - and the humanitarian - the wish to better the circumstances of non-Europeans." The time of new imperialism was a time during which Europe was ascendant due to industrialisation. She was rich, powerful and very advanced in civilisation compared to the rest of the world. This provided the motivation for her to assert her strength - it made Europe proud and self-righteous. However, Porter admits that: "Rather than providing the spur to action, cultural self-confidence was no less likely to be the consequence of successful imperial assertion..." Appeals to the values of one's own culture or civilisation could provide additional rhetoric, which were both politically and psychologically useful in justifying European expansionism. In conclusion, what sums up the question of whether European imperialism was a result of the assertion of national strengths or because of concerns for national weakness could be that both mutually reinforced each other, creating a synergy that resulted in concrete annexation of territory. Perhaps the truth could be found in the fact that the renewed assertion of national strength was merely ballast to pessimism, a defence against domestic doubts. We must also remember that different nations would have had different priorities - France for example, because of her bitter disgrace in Alsace-Lorraine, would place greater emphasis on regaining back her national prestige, never mind whether or not it would undermine her national strength. Germany however, would probably have been more cautious, because of her fear of upsetting the existing balance of power in Europe. ...read more.