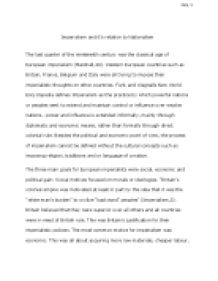 Nationalism and Imperialism in the Late Nineteenth Century

﻿Cote, Imperialism and it?s relation to Nationalism The last quarter of the nineteenth century was the classical age of European imperialism (Marshall,49). Western European countries such as Britain, France, Belgium and Italy were all trying to impose their imperialistic thoughts on other countries. Funk and Wagnalls New World Encyclopedia defines Imperialism as the practice by which powerful nations or peoples seek to extend and maintain control or influence over weaker nations...power and influence is extended informally, mainly through diplomatic and economic means, rather than formally through direct colonial rule. Besides the political and economic point of view, the process of imperialism cannot be defined without the cultural concepts such as imposing religion, traditions and or language of a nation. The three main goals for European imperialists were social, economic and political gain. Social motives focused on morals or ideologies. ?Britain?s colonial empire was motivated at least in part by the idea that it was the ?white man?s burden? to civilize ?backward? peoples? (Imperialism,3). Britain believed that they were superior over all others and all countries were in need of British rule. ...read more.

Western Europe was in a good place in the last quarter of the nineteenth century. Crime was low, advances in transportation were taking place and international trade was flourishing, however this was also the time of mass democracy, unionization, and urbanization. There were groups of people who questioned the authority of the current government and the lack of power and say they had. ?Both landed aristocracy and new industrial bourgeoisie had a vested interest in halting the slow diminution of their monopolization of power? (Stapleton, 44) European countries seeking to imperialize countries needed to be a unified and strong country in order to attain their goal. Several means were used by the government to create national pride and loyalty, first compulsory education for primary school was introduced. In school students were taught the basics of reading and writing, but they were also taught their duty to their country.?School curricula emphasized duty, deference in order, collegiality, respect for class division, loyalty to the State, the uniqueness of the national character and the notion of race as the dominant world force? (Stapleton, 44). Secondly, national symbolism became prominent. National anthems were developed, holidays were introduced and national flags were flown from public buildings. ...read more.

And by the late 1800?s Britain expanded their rule to include Egypt, Kenya and South Africa. Asia was also under imperial control. The British, Dutch and French all established or expanded their control. But eventually imperialism failed. When Britain came into Africa and implemented their government, health care and schooling, they were teaching the Africans how to live the British life. In school they were taught how to read and write in English, health care helped them stay healthier and they learnt about democracy from observing the government. Africans soon realized that they were not British and they were not going to be ruled by the British. African culture was just too different from the British culture and the two groups clashed. The African people still had strong beliefs and pride in their own culture. In a way you can say nationalism helped African and Asian countries overcome imperialism. When you look at the big picture nationalism helped all countries unify. Whether it be Western Europe who used nationalism to justify implementing imperialism on overseas countries or Africa and Asia who used nationalism to overcome imperialism. In both cases countries unified and fought for what they needed as a country. ...read more.