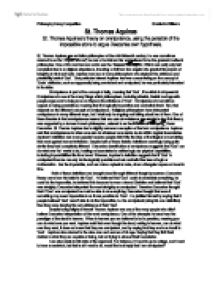 Paradox of the Stone

St. Thomas Aquinas St .Thomas Aquinas's theory on omnipotence, using the paradox of the impossible stone to argue Descartes own hypothesis. St. Thomas Aquinas was an Italian philosopher of the mid-thirteenth century. He was sometimes referred to as the "Angelic Doctor"; he was a Dominican friar and believed to be the greatest medieval philosopher. One of his most famous works was the 'Summa Theologica`, Which was sadly only half completed due to a religious experience, involving a visit from two angels who granted his prayers of integrity of mind and body. Aquinas was one of many philosophers who explored the existence and plausibility behind 'God`. One particular interest Aquinas had was concentrating on the concept of 'Gods` attributes, such as supposedly being omniscient and omnipotent; he was particularly interested in the latter. Omnipotence is part of the concept of deity, meaning that 'God`, if he exists is all-powerful. Omnipotence is one of the many things which philosophers, including atheists, theistic and agnostic people argue over to help prove or disprove the existence of 'God`. Omnipotence is sometimes argued as being paradoxical, meaning that it is logically impossible and contradicts itself. But, that depends on the different concepts of omnipotence. Religious philosophers have interpreted omnipotence in many different ways, but I shall only be arguing and talking about two of them. One of these theories is that omnipotence means that one can do whatever one wants to do. ...read more.

Aquinas also referred to the wise men and women of his age. Saying that they limit their desires to what they are capable of doing, but not trying to exceed their boundaries. I can also relate to this side of the argument. For instance, if I want to go to college, and I want to have a sandwich, but that is all I want to do, would that not imply that I am omnipotent? So by saying that omnipotence means that God can do whatever he wants isn't really a celebration of his divinity, not in Descartes sense of the word omnipotent anyway. Aquinas argued that if Descartes definition of omnipotence was true then why are these wise men and women not omnipotent? The most famous argument put forward by Aquinas, which refuted Descartes theory of omnipotence was 'the paradox of the impossible stone`. Aquinas said that if 'God` was all-powerful and could do everything, then 'God` could create a stone that was too heavy for 'him` to lift? Aquinas said that if 'God` couldn't then there is something that 'God` can't do, that is to say make the stone, But if 'God` could, then again there is something 'he` can't do, lifting the stone. This paradoxical analogy proves that Descartes theory cannot be correct, because it contradicts itself. Similarly to Aquinas's refusal to accept Descartes theory Ren� also dismissed Aquinas's hypothesis. Descartes thought that Aquinas's definition of omnipotence it taking away the very essence of 'God`. ...read more.

So because a human can do it, it completely contradicts the idea of 'God` and 'his` omnipotence. Alternatively, if I pursued Aquinas's view on omnipotence we would have to presume, following Aquinas's definition, that 'Gods` idea of logic and possibility is the same as humans. The problem with this concept is that by associating our idea of sense and reason with 'God` is quite sacrilegious, as it implies that both 'God` has the same intellectual limitations as us. This also contradicts the whole idea of omnipotence, in much the same way as Descartes does. So because of the flaws in both theories I don't think that it is possible to decide which definition is more believable considering both parties are theists. But if, like me, one party is agnostic it is easier to believe that 'God` is omnipotent in the sense of Descartes' definition. This is because it allows a person with a doubtful faith the assurance that if there is a 'God` then that 'God` has some form of divinity and knowledge which is unimaginable to a mere mortal. . But if you are a complete theist you would follow Aquinas's theory, as it implies 'God` has some familiar characteristics that a human can associate with. But either way no matter what these philosophers say neither of these definitions don't prove nor disprove the existence of God. They only enhance the lack of knowledge anyone has of 'him`. So this Philosophical debate could last for eternity. Philosophy Essay Competition Charlie McWilliams ...read more.