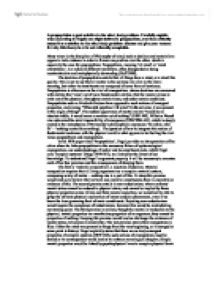 Is panpsychism a good solution to the mind-body problem. Carefully explain why (according to Nagel) one might believe in panpsychism, and then critically assess it as a solution to the mind-body problem: discuss and give your reasons for why this theory is or is not rationally acceptable. Many views in the discipline of Philosophy of mind, such as dualism and materialism appear to lack evidence in order to favour one position over the other, which is especially the case for panpsychism. Panpsychism, meaning 'all mind' or 'mind everywhere', is a radically different worldview, often disregarded as being counterintuitive and metaphysically demanding (Goff 2009). The doctrine of panpsychism entails that all things have a mind, or a mind-like quality. This is not to say that all matter in the universe are alive in the literal meaning, but rather its constituents are composed of some form of sentience. Panpsychism is often seen as the rival of emergentism, whose doctrines are concerned with entities that 'arise' out of more fundamental entities, that the mental comes to exist out of the physical, throughout certain times, and under certain conditions. Panpsychists such as Friedrich Paulsen have opposed to such notions of emergent properties, exclaiming, "When did psychical life arise? It did not arise, it was present at the origin of things". ...read more.

For example, the mechanisms of how the heart pumps blood, or how the liver functions are all understood in the mere sense of epistemological emergence; our understanding of nature is limited by the subsequent extent of our knowledge. On the other hand, the mind, which encompasses entities such as consciousness and mentality, cannot be categorized as some kind of new material organ that is awaiting discovery or simply emerge. It is the burden of the emergentist to provide one, or convince us to be content with the brute fact that mental properties are conditioned by certain physically complex states in a fundamentally inexplicable way. Both Panpsychism and Emergentism face difficulties, neither of which have clear solutions. Careful consideration should be exercised when determining the grounds to accept Nagel's fourth premise on non-emergence. If one proceeds to accept the anti-emergence premise, it should not be on the basis that the only alternative is to believe in 'magic' (Van Cleve 1990:219). Nagel has established that fundamental particles will not comprise of consciousness, let alone intelligence or perception (Van Cleve 1990:218 ), however he brings up the notion of 'proto-mentality' which was given by Nagel (1979), which can be defined as an unconscious form of mentality. It must be clarified here that Nagel's argument requires that it operate under 'logical necessity', if not the second and fourth premise of non-reductionism and non-emergentism, respectively, will not be coherent. ...read more.

Panpsychism appears to be an issue of the mind, that it is a part of all matter in varying levels. It appeals to the idea that matter alone cannot explain consciousness. As disclosed in previous paragraphs, panpsychism and emergentism both challenge each other directly. Either one is a panpsychist, believing that consciousness was present in things from the very beginning, or an emergentist who understands that consciousness emerges at certain points in time. This issue of consciousness is one of the central issues in the philosophy of mind, and is what largely makes the mind-body problem seem intractable. Panpsychism entails notions and concepts, many of which we have a hard time proving and disproving - which may be largely due to our progressive, yet still rudimentary understanding of nature. Panpsychism takes a great leap; past things that probably still have not been looked into carefully enough. For the time being, understanding the world as it is in its confines may be imperative, hence committing to any kind of panpsychism just yet may prove to be dangerously premature. As for it providing a solution to the mind-body problem, it seems highly unlikely - the theory leaves large gaps that can only be filled by things that at the most, can only be speculated. ...read more.