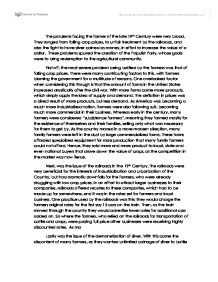 The problems facing the farmer of the late 19th Century were very broad. They ranged from falling crop prices, to unfair treatment by the railroads, and also the fight to have silver coined as money, in effort to increase the value of a dollar. These problems spurred the creation of the Populist Party, whose goals were to bring redemption to the agricultural community. First off, the most severe problem being battled by the farmers was that of falling crop prices. There were many contributing factors to this, with farmers blaming the government for a multitude of reasons. One overlooked factor when considering this though is that the amount of farms in the United States increased drastically after the civil war. With more farms came more products, which simply apply the idea of supply and demand. The deflation in prices was a direct result of more products, but less demand. As America was becoming a much more industrialized nation, farmers were also following suit, becoming much more commercial in their business. ...read more.

One practice used by the railroads was this: they would charge the farmers original rates for the first say 15 cars on the train. Then, as the train moved through the country they would advertise lower rates for additional cars added on. So where the farmers, who relied on the railroads for transportation of cattle and crops, were paying full price other businesses were receiving highly discounted rates. As ma Lastly was the issue of the demonetization of silver. With this came the discontent of many farmers, as they wanted unlimited coinage of silver to battle the falling crop prices and increase the amount of money in circulation. Another problem that contributed to the shortage of money in the nation was the monopolies in the late 19th century. There were few rich men who owned so many companies; they possessed much of the money that was in circulation, essentially, controlling the market prices single handedly. In response to these issues, farmers started binding together forming alliances to fight the government, the economy, and the monopolies of the time. ...read more.

The idea behind the party was to represent the everyday person, and keep the farmers and working class out of poverty. Although the Populist Party had some hold in the late 19th century, it failed to ever win a presidential election, or to bring any major reforms to the farming industry; the party was effective in electing local and state legislators. Populism though, had some effect for the farmers of that time. It enabled them to bind together as an organized group, express their grievances, and gain a sense of belonging to the community they had previously lacked. In conclusion, the farmers of the late 19th century faced many legitimate problems. With the falling crop prices, dominating monopolies and demonetization of silver, farmers had some tough decisions to make. In the end, they decided to bind together and form alliances that are historical even today. The problem with their grievances was that they were not always relevant to anyone but the farmers. They placed blame on issues that were not necessarily responsible for their downfall. The major problem faced by farmers was worldwide, not confined to the obstacles that they blamed outwardly. ...read more.