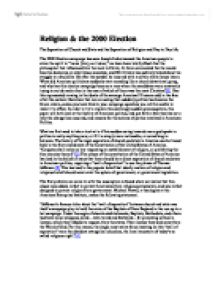 Religion & the 2000 Election The Separation of Church and State and the Separation of Religion and Day to Day life. The 2000 Election campaign has seen Joseph Liebermanask the American people to allow the spirit to "move [him], as it does," we have been told by Bush that the philosopher that influenced him the most is Christ, Al Gore commented that he would base his decisions on what Jesus would do, and Bill Clinton has publicly talked about his struggle to rebuild his life after the scandal he incurred with a certain white house intern. When did American politicians suddenly start sounding like a church devotional group, and why has this election campaign become a race where the candidates were constantly trying to out do each other in the area of which of them was the most Christian?[1] Has this represented a swing in the ideals of the average American? It seems odd in the face of all the cultural liberalism that we are seeing that suddenly politics has become the forum where, unless you have God in your campaign speeches you will be unable to make it to office. In order to try to explain this seemingly sudden preoccupation, this paper will both look at the history of American politics, and put forth a few theories as to why the change has occurred, and reasons for the actions of parties involved in American Politics. What we first need to take a look at is if this sudden swing towards more god speak in politics is really anything new, or if it is simply more noticeable, or something in between. The history of the legal separation of church and state in America can be traced back to the first amendment of the Constitution of the United States of America. ...read more.

" They teach abstinence from sexual activity outside marriage as the expected standard for all school age children, and that abstinence from sexual activity is the only certain way to avoid out-of-wedlock pregnancy, sexually transmitted diseases, and other associated health problems." The most significant aspect about this passage is not so much what it is saying up front, but the message within that message. It becomes clear that the position of the Bush campaign is that the married two-parent family that includes a mother and a father is the only family that is considered a positive family. A morality that can be directly traced back to the religious teachings of the right oriented churches. Ergo, under the Bush philosophy, it can be inferred that a single woman who chooses to have a baby out of wedlock falls into the negative statistic column. This, and many other examples just go to show you that the idea that religion and politics have been separate is, in fact, not the case. Another theory as to why religion has become a much less taboo subject is because in fact fewer Americans are as religious. As the public has become less religious it doesn't mean as much that they have come to believe in a God any less, it simply means that they are not as divided along religious lines to the extent that the American public has been divided along religious lines in the past. Another interesting fact to this slide is, "at their convention in Philadelphia, the Republicans spoke less in the vocabulary of faith than they did from 1984 to 1996."[8] This is significant in the fact that the religious leanings of the party have, in fact, been lessened when it comes to some of their policy issues. ...read more.

This is why it is possible for Bush to say that the philosopher who influenced him most is Christ, while also supporting the death penalty, something that Jesus made clear as not being an option, when he stepped in and prevented the stoning of the prostitute outside the temple. Or, perhaps Bush would have a hard time explaining how the republican position against gun control fits into the philosophy of Jesus. While the pro-choice and pro-abortion stance of the democrats decidedly does fit into the teachings of the sanctity of life, as they are outlined in the New Testament. Personal religious belief and religious practice aside, when one really takes a critical look at both of the parties, the morality that is required by both God and the Church simply is not there and this fact would be clear to any actually practicing Christian. Thus what should in fact be suggested as one of the major reasons for why it is ok to invoke God's name in all its forms, is the fact that it is, in reality only lip service, to the same extent of the lip service of musicians thanking God in their acceptance speeches. When it comes to the electing of officials, it is the policy and actions of the two parties that people will judge when it comes to their electoral vote. The invoking of the name of God by the politicians is no different then the practices of 'Sunday Christians.' They will statistically fall into the category of religious, but practically fall into the category of secular non-believers, who make their decisions based on what serves their needs best, as opposed to what serves their God. ...read more.