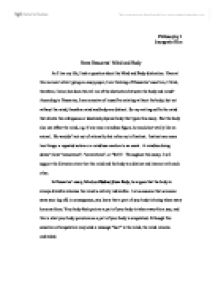 Philosophy 1 Jeongmin Kim Rene Descartes' Mind and Body As I live my life, I ask a question about the Mind and Body distinction. Even at this moment while typing an essay paper, I am thinking of Descartes' assertion, I think, therefore, I exist, but does this tell me of the distinction between the body and mind? According to Descartes, I can conceive of myself as existing without the body, but not without the mind, therefore mind and body are distinct. So my writing self is the mind that directs the ambiguous or deceived physical body that types this essay. But the body also can affect the mind, e.g. if one was a mindless figure, he would act totally like an animal. He wouldn't act out of rationality but rather out of instinct. Instinct can mean two things: a repeated action or a mindless reaction to an event. A mindless being doesn't have "conscience", "convictions", or "faith". Throughout this essay, I will support the Cartesian view that the mind and the body are distinct and interact with each other. In Descartes' essay, Mind as Distinct from Body, he argues that the body is always divisible whereas the mind is entirely indivisible. Let us assume that someone saws your leg off, in consequence, you know that a part of your body is being taken away by some force. ...read more.

And interact? Everything is composed of matter and energy and can be explained by physical laws. All human activity can be understood as the natural behavior of matter according to mechanical laws and therefore thinking is merely a complex form of behaving. It looks more logical to see that thalamus in this part of the brain recognizes different colors and report the result of optical transmissions to the headquarters, and consequently, other parts of body move or react according to the headquarters' command. Therefore, the above example of a neurosurgeon cannot be explained by the mind and body distinction but can be clearly explained by the physical laws. Here I would like to analyze the mind and body distinction with a different approach. Mathematicians say that a line exists in the first dimension, a plane in the second dimension, and a three dimensional objects in the third dimension. For example, a movie screen we see at a theater is in the second dimension because it is just a plane, but things that are coming out of the movie screen like a 3-D movie is said to be in the third dimension. Mathematically, bodies reside in the third dimension where objects are seen in every possible angle but constrained to time, whereas minds are in the fourth dimension where objects can be seen in all angles and can freely travel through the time dimension (past, present, and future), but because of time variable is in the fourth dimension, three dimensional observers can't see objects in the fourth dimension. ...read more.

Because of the fact that the machines only function according to the calculated optimum result of the various information that they have received from outside world, machines don't understand the meaning of having a true heart, generous heart, or anything. I had described that the mind and body are totally distinct. I added more explanations to the Descartes' argument: minds are totally distinct from bodies. I used mathematical methods to compare minds and bodies that minds are dimensionally different from bodies. I argued that minds exist in human beings. I showed that humans have minds whereas highly sophisticated computers can imitate human actions and thinking process but don't have conscience. In modern days, people tend to look more for physical explanations rather than mental or spiritual explanations. It is, in my opinion, quite absurd to conclude that everything in this world involves only physical substances because the fact that human beings are simply too complicated to say that we are only physical beings. There is something called "Conscience" besides knowledge in our brain. This conscience pushes us to do the right thing when, in fact, it may not be the wise thing to do in certain situations. This is nothing like any information that is kept in our brain. This is something besides our physical stuff but rather mental or spiritual stuff that employs itself in our decision to act. Therefore, we should believe that the mind and the body exist and are totally distinct but interact with each other instead of believing that everything is physical. ...read more.