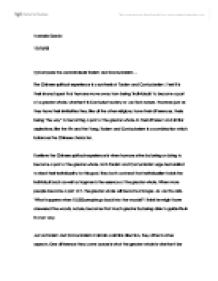 Taoism is the way of the universe. It is the "driving power" in everything which exists. It is "nature's orderer." It puts everything in its place without any spark of prejudice. Taoism is the way of human life. It is humans emulating water. It is humans doing by not doing. It is humans allowing nature to guide them. Confucianism follows the way of doing. It's model figure is the Chun Tzu who in our society could be likened to a moral leader. Humans strive to become the Chun Tzu (Superior Man) because they must serve others. To become a Chun Tzu, one must first follow the way of Jen by respecting themselves and maintaining a sensitivity towards all humanity. One must strive to be just to others and to be understanding of others emotions. One must also follow the Silver Rule of not doing those things they would not have others do to them. Another division between the two religions is their contrasting beliefs as to what force makes the other great. Taoists believe it is the way or the Tao that makes humans great. This is because it is the Tao by which humans are able to rejoin with nature. By rejoining nature, we are able to regain power in allowing nature to do things or things to do themselves. ...read more.

They would be the rightful protectors of all they govern. They would also uphold the principles of Li for they would understand that they have been given a chance to make society greater and to maintain its greatness. If we followed Taoism or Confucianism, we would fully support the arts of our days. We would provide the means for artist to flourish and places to share their works. There would be no art critics for the purpose of art is to bring society together. Critics are deconstructionists and they would be a hindrance in the natural expression of art. It is in the naturalism of art that the two religions find its power of unity. Run by the Chinese religions, our society would appreciate art not because people's analysis finds it excellent but because art is a grounds of bringing people together. We look to the stars in search of our future when we only need look at ourselves to find it. Before we can reach the stars we must be one entity. I believe this is the overall lesson of the Chinese religions that to be great we must be unified. Imagine what we could become and where we could go if we have our opposite forces working together. Once this were to happen, nothing could ever work against us. ...read more.