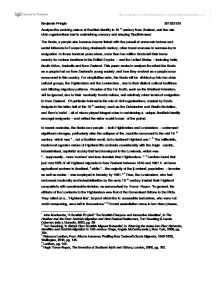 Analyse the evolving nature of Scottish identity in 19th century New Zealand, and the role civic organisations had in maintaining memory and shaping 'Scottishness'. The Scots, a people who became forever linked with the pursuit of economic fortune and social influence in Europe's long nineteenth century, often found avenues to success lay in emigration. In those hundred years alone, more than two million Scots left their home country for various locations in the British Empire - and the United States - including India, South Africa, Australia and New Zealand. This paper seeks to analyse the effect the Scots as a people had on New Zealand's young society, and how they evolved as a people once ensconced in this country. For simplicities sake, the Scots will be divided up into two clear cultural groups, the Highlanders and the Lowlanders, due to their distinct cultural traditions and differing migratory patterns. Peoples of the Far North, such as the Shetland Islanders, will be ignored, due to their markedly Nordic culture, and relatively minor levels of emigration to New Zealand. Of particular interest is the role of civil organisations, created by Scots �migr�s in the latter half of the 19th century, such as the Caledonian and Gaelic Societies, and Burn's 'cults' - all of whom played integral roles in maintaining a unique Scottish identity amongst emigrants - and reflect the wider social forces of the period. In recent centuries, the Scots as a people - both Highlanders and Lowlanders - underwent significant changes, particularly after the collapse of the Jacobite movement in the mid 18th century, which was "...not a Scottish revolt, but a factional Highland one."1 The militaristic, feudal and agrarian nature of Highland life contrasts considerably with the Anglo-centric, industrialised, capitalist society that had developed in the Lowlands, which was "...supposedly...more 'modern' and less clannish than Highlanders..."2 Lenihan found that just over 50% of all Highland migrants to New Zealand between 1840 and 1881 had been agricultural workers in Scotland,3 while "...the majority of the ...read more.

moved elsewhere once the rush waned - as they had left Victoria, Australia previously - the rush helped develop Otago as a region, and was vital to the establishment of a burgeoning civil community. The Scots, a highly mobile group within the British Empire, "...seem to have been proportionately more disposed to emigrate [than the English], perhaps not surprisingly given their more meagre domestic opportunities"34 and "...loomed large in the influx of prospective miners to Otago..."35 at rates higher than even the English in the early 1860s. Thus, it is possible to evaluate the gold rush's effect on Otago: it helped attract large swathes of Scots, who as accomplished networkers and economically mobile individuals had a higher propensity to undertake such a risky endeavour than their English counterparts, for example. The surge of Scots during the brief rush had an indelibly strong effect on Dunedin, helping to establish - among many other institutions - its university, and many cultural associations that served to strengthen ties with the Old Country and develop a sense of 'Scottishness' in New Zealand. These civic and ethnic associations aimed at promoting various aspects of Scots culture - be it manufactured or otherwise, and maintain memories of Scotland. Appearing from the 1860s onwards,36 these associations became bastions of remembrance, and integral in the evolution of a uniquely New Zealand 'Scottishness'. Bueltmann's extensive research of Scottish associations - Burns, Gaelic and Caledonian - concludes that they all aimed to "...overcome the potentially fracturing effects of setting up home in an alien world"37, and in a decidedly Scottish way, established groups that sought to "...support the weakened social fabric of their new home by means of fraternal bonding..."38 Building on this theory, she argues, "...Scots became members of associations because they wished to re-create the life of the old country. Perhaps melancholy and longing lay behind the desire to wallow in memories of 'auld Scotia'..."39 Melancholy or not, the three Scots associations examined in this paper all developed into highly distinctive beings, each reflecting the unique cultural and historical traditions that contributed to their creation. ...read more.

The Scots played a vital role in this process, due in part to their civic-mindedness and predilection to associations like the Gaelic, Caledonian and Burns cults. Bueltmann concludes: "The reason Scots culture permeated so widely is because Scottish associations were not free-floating, or isolated; the Scots did not occupy an ethnic-urban ghetto and were not divided from the host society by language or religion. Instead they were deeply rooted in New Zealand civil society. They shaped that society and yet they still found the necessary space for ethnic-national expression."69 The notion of associations being closely linked resonates in her finding that "...cordial ties existed between the Gaelic Society and the Burns Clubs"70 in Dunedin, while "...Burns Club and Caledonian Society members were present at the annual gatherings of the Gaelic Society."71 Such cultural links hint at the strong informal networks that existed between New Zealand's 19th century Scots, whose strongly unique culture was perceived as the "...denomination of dissent"72 by other groups wishing to emphasise non-English distinctiveness. Belich concludes, "Outside Scotland itself, there probably is no other country in the world in which Scots had more influence"73 before concluding that "New Zealand is the neo-Scotland."74 His appraisal of the evolution of New Zealand 'Scottishness' varies considerably from Bueltmann; the former argues for a the existence of a people "...archetypally egalitarian, competent, undemonstrative and somewhat dour"75 while the latter argues that "an instrumental interpretation of ethnic identity...did not obliterate the underlying cultural fabric of Scottishness. Instead, an interplay between the two...existed."76 Her argument interprets the development of a unique Scottish identity in New Zealand as being a three part process: "Scottish immigrants became Scottish New Zealanders who became New Zealand Scots."77 Brooking's conclusion helps understand the Scottish experience in New Zealand - "...whether Highlander or Lowlander, very few Scottish migrants wanted to return to any kind of feudal order, romantic or otherwise."78 While many Scots clung to the memory of the Old Country, they recognised the vitality of their new home, as illustrated by John MacKenzie's daughters' observations upon returning to Scotland: "Scotland [is] 'pretty', [but] is not equal to New Zealand. ...read more.