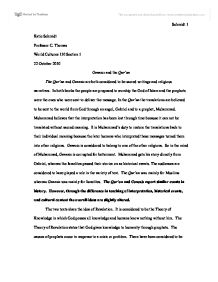 The Quran and Genesis report similar events in history. However, through the difference in teaching of interpretation, historical events, and cultural context the overall ideas are slightly altered.

Katie Schmidt Professor C. Thomas World Cultures 110 Section 1 22 October 2010 Genesis and the Qur'an The Qur'an and Genesis are both considered to be sacred writings and religious narratives. In both books the people are proposed to worship the God of Islam and the prophets were the ones who were sent to deliver the message. In the Qur'an the translations are believed to be sent to the world from God through an angel, Gabriel and to a prophet, Muhammad. Muhammad believes that the interpretation has been lost through time because it can not be translated without sacred meaning. It is Muhammad's duty to restore the translations back to their individual meaning because the later humans who interpreted these messages turned them into other religions. Genesis is considered to belong to one of the other religions. So in the mind of Muhammad, Genesis is corrupted for betterment. Muhammad gets his story directly from Gabriel, whereas the Israelites passed their stories on as historical events. The audiences are considered to have played a role in the variety of text. The Qur'an was mainly for Muslims whereas Genesis was mainly for Israelites. The Qur'an and Genesis report similar events in history. However, through the difference in teaching of interpretation, historical events, and cultural context the overall ideas are slightly altered. ...read more.

According to Genesis, a serpent tempted the two of them to eat fruit from the tree by telling them they would become like God himself (Genesis 3:1-6). Shortly after eating from the tree, the two became ashamed of their nakedness and were questioned by God (Genesis 3:8). A curse was then put to humankind to suffer in childbirth and sweat in labor (Genesis 3:4-22). In the Qur'an, Satan tempted them to eat from the tree. Just as in Genesis, the two were ashamed of their nakedness. However, no curse was issued. They were just sent down from paradise onto the earth (Koran 7:24). This move was to show the difference in a life of luxury versus a life of labor. Noah was another prophet both in Genesis and the Qur'an who tried to change the wicked people. In Genesis, it is God's idea to destroy the people and save those who are good. He commands Noah to build an Ark and board those who are not wicked until the waters retreat (Genesis 6:13-22). The only people who board are Noah's wife, his three sons, and their wives (Genesis 7:7). In the Qur'an it is Noah's idea to destroy the wicked people. Most of the text is about Noah and his journeys in which people reject him. ...read more.

They then understood why the Prince's wife had wanted this seduction. So the woman began cutting themselves because they wanted God to preserve them. But Joseph chooses to go to jail instead of falling into their temptation (Koran 12:30-33). Although, Joseph went to prison two different ways, once he got there the stories are the same. After the interpretation of some dreams, the Pharaoh assigns him to be the overseer of the land of Egypt. When the seven years of famine comes he has already prepared. So, everyone comes to him for grain. When his brothers come they do not recognize him so he asks them to bring the rest of the family too. After the brothers do this, Joseph shares his secrete and reunites with his entire family (Genesis 42-50: 18; Koran 12:46-101). The Qur'an and Genesis report similar events in history. However, through the difference in teaching of interpretation, historical events, and cultural context the overall ideas are slightly altered. Through the stories of Adam, Noah, and Joseph it is shown the difference in cultural context. Each story differs because of the audience being used. While the Qur'an is speaking to Muslims, the Christians and Jews are being taught the historical events of the Israelites through Genesis. It is important in knowing the purpose of the two texts. The Qur'an is the teaching of interpretation where as; Genesis is for the learning of philosophy and forgiveness of sin. ...read more.