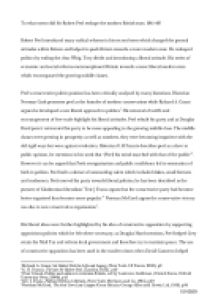 To what extent did Sir Robert Peel reshape the modern British state, 1841-46?

﻿To what extent did Sir Robert Peel reshape the modern British state, 1841-46? Robert Peel introduced many radical reforms in his second term which changed the general attitudes within Britain and helped to push Britain towards a more modern state. He reshaped politics by ending the clear Whig, Tory divide and introducing a liberal attitude. His series of economic and social reforms metamorphosed Britain towards a more liberal modern state which encompassed the growing middle classes. Peel?s conservative politic position has been critically analysed by many historians. Historian Norman Gash promotes peel as the founder of modern conservatism while Richard A. Gaunt argues he developed a new liberal approach to politics.[1] His removal of tariffs and encouragement of free trade highlight his liberal attitudes. Peel rebuilt his party and as Douglas Hurd puts it reinvented his party to be more appealing to the growing middle class. The middle classes were growing in prosperity as well as numbers, they were becoming impatient with the old rigid ways but were against revolution. Historian G.H Francis describes peel as a slave to public opinion, he mentions in his work that ?(Peel) his mind marched with that of the public?[2]. However it can be argued that Peels reorganisation and public confidence led to restoration of faith in politics. Peel built a cabinet of outstanding talent which included dukes, small farmers and tradesmen. ...read more.

The 1842 Railway act ensured safe running of the railways. New lines were to be inspected by the board of trade who had more authority to demand traffic return and question any accidents. This Act created the Modernisation as we see it today with tightening of rules and regulations all the time. He passed a series of other railway acts which modernised and made efficient the railway. The 1844 Bank Charter Act created stability and confidence in the pound which restricted previous banks from issuing notes, the main objective was to strengthen relationship between paper money and gold reserves.[11] The low lending rate which had been cut to 3¼% which allowed construction of more railway thus creating speculation on railway construction and allowing capital to be generated. Peels economic policy has been described by Blake as successful[12]. His policies led to a time to an age of prosperity which involved financial stability and revision of free trade; His policies moved Britain towards becoming a liberal modern state[13], these ground breaking acts created the perfect breeding ground for monopolies. The economy was further stabilised through The Companies Act of 1844 which controlled the formation of businesses and stated that all companies had to be registered and submit annual accounts. In the 1842 budget, Peel reintroduced the income tax for 5 years temporarily to raise revenue; The rate was set at 7d which has been estimated to have raised £3.7 million[14]. ...read more.

for women was fixed at 12 hours maximum for women, while the hours for factory children was reduced to six and a half days to allow time for schooling. Gash argues that these acts introduced a new category of protected adults.[25] He further supported and strengthened his reforms with the railway act of 1844 which limited cost of travelling on some trains to 1p. These reforms transitioned into the modern British state which eventually sees the introduction of minimum wage. Blake states in his work that peels reforms showed his abilities as a progressive reformer[26]; Peel encouraged these social reforms in order to keep peace and avoid radicalism. One can argue that Peels reforms were limited and didn't address enough during 1841 - 1846, however Robert Peel reshaped the modern British state significantly and acted as a catalyst to the creation of the modern British State. He set out to change peoples mentality and general attitude towards political and social policies, while suppressing radicals and avoiding revolution. He encouraged the growth of liberal moderate politics by encompassing the growing middle classes into politics. His political reforms and ideologies led to the formation of the Liberal Party. His economic policies encouraged a railway revolution which acted as a catalyst to expand British economics and help form liberal free-trade economics. While his social reforms created movement towards better working condition for the working classes. Peel set into motion the wheel of reshaping the British state into a modern British state. ...read more.