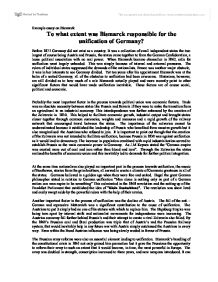 To what extent was Bismarck responsible for the unification of Germany?

Example essay on Bismarck To what extent was Bismarck responsible for the unification of Germany? Before 1871 Germany did not exist as a country. It was a collection of small independent states the two largest of course being Austria and Prussia, the states came together to form the German Confederation, a loose political association with no real power. When Bismarck became chancellor in 1862, calls for unification went largely unheeded. This was simply because of internal and external pressures. The rulers of individual states suppressed the demands of the nationalists. France was another major obstacle, it was in her interests to see Germany divided. Yet ten years after his appointment Bismarck was at the helm of a united Germany, all of the obstacles to unification had been overcome. Historians, however, are still divided as to how much of a role Bismarck actually played and more recently point to other significant factors that would have made unification inevitable. These factors are of course social, political and economic. Probably the most important factor in the process towards political union was economic factors. Trade was an absolute necessity between states like Prussia and Bavaria if they were to make the transition from an agricultural to an industrial economy. This interdependence was further enhanced by the creation of the Zolverein in 1830. This helped to facilitate economic growth, industrial output and brought states closer together through common currencies, weights and measures and a rapid growth of the railway network that encouraged travel between the states. ...read more.

Even within the Bund Austrian influence was being slowly eroded in favour of Prussia. The Prussian army reforms were also an essential element leading to unification. Bismarck's handling of the constitutional crisis in 1861 not only gained him promotion but it gave the Prussians the opportunity to reform their army to such an extent that it would become, in time, the most powerful in Europe. The army was doubled in strength, conscription increased to three years, and new weapons introduced. It can be argued that the reform of the army was Bismarck's first step on the path towards unification. This was essential if unification was to be achieved through force. Bismarck set Prussia on a war footing. The first of his wars was to be against Denmark in 1864. Historians argue that he used this war in order to manoeuvre and then manipulate Austria into a future war with Prussia. The war began over the provinces of Schleswig and Holstein. The Danish king wanted to incorporate them into Denmark. The problem was that they were members of the Bund and both had substantial German populations this caused an outcry among the members of the confederation. Prussia and Austria defeated the Danes in a short war.. The Austrians reluctantly agreed to take over the province of Holstein, manipulated of course by the Prussians. ...read more.

Bismarck used his diplomatic skills to isolate France from the rest of Europe. War began over the issue of the Spanish succession when Bismarck changed the Ems telegram to make it look as if the French ambassador had been snubbed. This was the last straw for the French and they declared war in July 1870. Thus Bismarck succeeded in making France look like the aggressor. The southern states quickly rushed to support the confederation, especially since they themselves were very hostile to the French. The French were defeated easily and during the war Germany was finally unified at the palace of Versailles in 1871. Clearly then Bismarck's contribution towards unification is very significant in that unification may not have taken place when it did without him at the helm. The German states had clearly indicated their diastase for unification in 1848 yet less than 25 years later Bismarck used Prussian military strength to achieve unification. However without the vital building blocks of economic integration, cultural ties, and of course nationalist elements there would have been very little if any calls for unification. Finally one cannot dismiss the importance of Austria's decline without which any hope of unification would be lost. It is fair to say that although Bismarck's contribution was essential in achieving unification at that time it may not have been a decisive factor in the process of unification. In other words unification would have been achieved without him, how and when is still a matter for debate. ...read more.