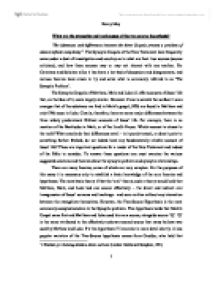 What are the strengths and weaknesses of the two-source hypothesis? 'The likenesses and differences between the three Gospels present a problem of almost infinite complexity'

What are the strengths and weaknesses of the two-source hypothesis? 'The likenesses and differences between the three Gospels present a problem of almost infinite complexity'1. The Synoptic Gospels of the New Testament have frequently come under a deal of investigation and scrutiny as to what are their true sources (source criticism), and how these sources may or may not interact with one another. For Christians and Scholars alike it has been a hot-bed of discussion and disagreement, and various theories have arisen to try and solve what is commonly referred to as 'The Synoptic Problem'. The Synoptic Gospels of Matthew, Mark and Luke all offer accounts of Jesus' life that, on the face of it, seem largely similar. However if one is scratch the surface it soon emerges that of the substance we find in Mark's gospel, 90% are found in Matthew and only 53% occur in Luke. Clearly, therefore, there are some major differences between the three widely predominant Biblical accounts of Jesus' life. For example, there is no mention of the Beatitudes in Mark, or of the Lord's Prayer. Which account is closest to the truth? What exactly do their differences entail - is it purely textual, or does it point to something further fetched; do we indeed have any fundamentally reliable account of Jesus' life? ...read more.

One can also see occasions where it seems as though Mark's words have been used, but Matthew or Luke have incorrectly edited the passage in trying to develop it; for example when Luke talks about the raising of Jairus' daughter. Jesus offers completely different instructions in Mark and Luke; which suggest that Luke has used Mark, but incorrectly. This seems to occur also in Matthew in relation to the story about the death of John the Baptist, where Mark's account seems to have been wrongly interpreted and poorly edited by Matthew. Overall, it would seem indeed that there is sufficient evidence to believe that Mark came first and is indeed a source of the writing of Matthew and Luke. The other side of the argument will be brought forward in due course. The second half of the two-source hypothesis is of course 'Q'. I've touched on some evidence that would support the existence (and co-existence with Markan priority) of 'Q' already. As we know, Mark's writing does not form the basis for 100% of Matthew (90%) or Luke (53%). There must, therefore have been a source independent of Mark that influenced them. As McKnight reminds us 'there are approximately two hundred verses, preponderantly sayings of Jesus, common to both Matthew and Luke which are not found in Mark;...the degree if similarity in wording...is striking'. ...read more.

This is basically the argument that claims Matthew and Luke are linked - Luke using Matthew as a source; once Matthew had used Q and Mark. This would seem to upset the terms of what we see Q as - something used independently by Matthew and Luke. One could still argue that there are two main sources (Mark and Q) but Matthew now comes into equation and, realistically, must also be considered a source. However 'if Luke and Matthew were largely dependent upon each other, one would expect, for example, that after the temptation there would be agreement in the placement of Jesus' sayings; but there is not'13. Luke cannot be proven to be dependent on Matthew - there is too much textual difference between the two for this to be the case, as McKnight suggests. Thus if Matthew and Luke are independent and yet contain so many passages with such striking similarity in wording, then it is reasonable to conclude that both were using one common source independently-Q.14 Having weighed up the strengths and weaknesses of the two-source hypothesis I feel, like the majority of New Testament scholars, that Mark and Q are more feasible and compliment each other better than any other combination of sources. The two-source hypothesis is, despite the challenges from other hypotheses, the strongest possible solution to the synoptic problem. ...read more.