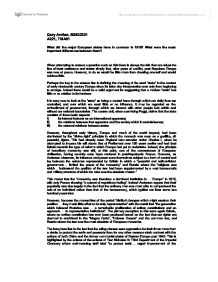 What did the major European states have in common in 1815? What were the most important differences between them?

Gary Archer, M2632321 A221, TMA01 What did the major European states have in common in 1815? What were the most important differences between them? When attempting to answer a question such as this there is always the risk that one takes the line of least resistance and states simply that, after years of conflict, post Napoleon Europe was now at peace. However, to do so would be little more than cheating one-self and would achieve little. Perhaps the key to the answer lies in defining the meaning of the word "state" in the context of early nineteenth century Europe since its latter day interpretation was only then beginning to emerge. Indeed there would be a valid argument for suggesting that a modern "state" has little or no relation to its forebear. It is easy now to look at the "state" as being a central force through which our daily lives are controlled, and over which we exert little or no influence. It may be regarded as the embodiment of government, through which we interact with other people both within and without our national boundaries. ...read more.

However, because the monarchies of the period "disliked changes which might weaken their position ... they made little effort to be truly representative" with the result that "the generation which followed Waterloo saw ... a remarkable proliferation of written constitutions and an approach ... to representative institutions". The primary exception to this were again Britain, where no written constitution has ever been produced based on the fact that our rights are deemed to enshrined in the "Magna Carta", "Habeas Corpus" and the common law, and Russia where the tsar was the most absolute of European monarchs. The irony here lies in the fact that the ruling classes were oppressive for their times more from a desire to protect the serfs and peasants than for any other reason-a stark contrast with the actions of both China and the former communist states of Eastern Europe post 1945. This is highlighted by the actions of the actions of Tsar Nicholas I's Third Department of the Imperial Chancery where well-meaning staff tried "to protect serfs.... ...read more.

It was also significant that the press, in the form of newspapers, was finally beginning to find its voice, although their popularity in Britain and France differed on the point of whether they supported or opposed the state machinery. There are many conclusions that may be drawn from the evidence presented by the various sources. However, it is easy to see that, overall, Europe was in many ways as divergent in 1815 as it remains today. That moves were being made towards similar goals across the continent can not be denied but the speed and effectiveness of these moves differed from country to country. However, the most significant point of note is that the period saw the beginning of the emergence of the modern-day state, one in which a central bureaucracy controls the lives of the people living within its national boundaries. Personally, I yearn for a return to the days when a hand-full of civil servants controlled an Empire that covered the globe rather than being suffocated in self-serving red tape that stifles and throttles the very essence that should be forever England! ...read more.