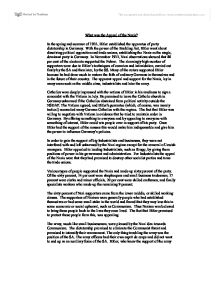 What was the Appeal of the Nazis?

What was the Appeal of the Nazis? In the spring and summer of 1933, Hitler established the apparatus of party dictatorship in Germany. With the power of the Enabling Act, Hitler went about dissolving political opposition and trade unions, establishing the Nazis as the single, dominant party in Germany. In November 1933, Nazi observations showed that 80 per cent of the electorate supported the Fuhrer. The alarmingly high number of supporters were due to Hitler's techniques of coercion and intimidation, carried out firstly by the SA and then later, by the SS. Many of the voters supported Hitler because he had done much to restore the faith of ordinary Germans in themselves and in the future of their country. The apparent appeal and support for the Nazis, lay in many areas such as the middle class, industrialists and later the army. Catholics were deeply impressed with the actions of Hitler in his readiness to sign a concordat with the Vatican in July. ...read more.

Thus Nazism was believed to bring these people back to the lives they once lived. The fact that Hitler promised to protect these people from this, was appealing. The army, much like small businessmen, were pleased by the Nazi idea towards Communism. The dictatorship promised to eliminate the Communist threat and promised to intensify their rearmament. The only thing troubling the army was the position of the SA. The army officers had their own esprit de corps and did not want to end up as an auxiliary force of the SA. Hitler, who knew the support of the army was crucial for his political ideas and ideas of making Germany a strong force in Europe, thought to win the support of the army by eliminating the SA. Hitler impressed many German people when he withdrew Germany from the disarmament Conference, League of Nations in October 1933 and when he pronounced that conditions in Germany should return to normal after the excitement of the past nine months. This was warmly welcomed by the people. ...read more.

This idea was attractive to many people, but in itself, Nazism was a pathetically thin and unsophisticated creed, little more than a transient amalgam of social resentment and national frustration. Crude and over-simplified projects such as Weltanschauung were designed to have an effect on millions of Germans, who were completely overwhelmed by early crisis's, such as the great depression. To attract young members, Nazis appealed to the spirit of idealism and self-sacrifice in German youth or harped on the need for a truly integrated society - the Volksgesmeinschaft - they touched on psychological needs which the republic failed to satisfy. A sense of national solidarity against Germany's foes was the new social cement which would overcome class differences and bind people together. Another appeal of the Nazis, was Hitler himself. He was a father-figure in who a disillusion and weary people could rest confidence and trust at a time of unusual stress and strain. To most Germans the appeal of Hitler and his party was that he was a "sight of discipline in a time of chaos, the impression of energy in an atmosphere of universal helplessness" - Albert Speer, 1931. ...read more.