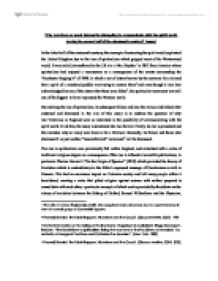 Why was there so much interest in attempting to communicate with the spirit world during the second half of the nineteenth century?

Why was there so much interest in attempting to communicate with the spirit world during the second half of the nineteenth century? (essay) In the latter half of the nineteenth century, the concept of contacting the spirit world captivated the United Kingdom due to the rise of spiritualism which gripped most of the Westernised world. It was initially transferred to the UK via a Mrs. Hayden1 in 1852 from America where spiritualism had enjoyed a renaissance as a consequence of the events surrounding the "Rochester Rapping's" of 1848, in which a set of sisters known by the surname Fox claimed that a spirit of a murdered peddler was trying to contact them2 and even though it was later acknowledged by one of the sisters that these were fakes3, the spiritualist movement was still one of the biggest to have impressed the Western world. By outlining the rise of spiritualism, its subsequent failure and also the various individuals that endorsed and dismissed it, the aim of this essay is to address the question of why late-Victorians in England were so interested in the possibility of communicating with the spirit world. To do this, the essay is structured into two halves: Firstly, its rise is presented and this includes why so many were keen to be a follower. Secondly, its failure and those who dismissed it as just another "nonconformist" movement4 will be discussed. The rise in spiritualism was prominently felt within England, and coincided with a crisis of traditional religious dogma as a consequence of the rise in influential scientific publications, in particular Charles Darwin's "On the Origin of Species" (1859) ...read more.

s�ance room whilst at the same time he performed in darkness.24 Aside from the declining influence of the church and the popularity of the s�ance, other enormous aspects contributing to the rise of spiritualism include its universal application. Virtually anybody could take part, and women in particular flourished within the spiritualist environment. This is evident from reading the work of Alex Owen who is able to illustrate the extent of the impact made by women on the movement. The reason for this impact, as Owen argues, is due to the beneficial facets of a female character. By utilising the pre-determined traits of their personality, which included the traditional Victorian adage of women being the homemaker, women were able to demonstrate their ability in various roles, most frequently though as a medium25. Positions that many believed females excelled at and were better than males due the traditional view of women's angelic and gentle nature. This spiritualist conception of femininity though was both liberating and restricting as whilst women were able to achieve positions of status within the movement, the implication of their role as homemaker was restrictive within wider Victorian society 26 as the biblical notion of women being subservient to men was prevalent within it, even in spiritualist households it was considered that men should have the power with women only possessing limited influence27. Under the wider context of women's influence in spiritualism, the name of Madame Helena Petrovna Blavatsky is at the fore. She had a desire to reform the spiritualist movement as she was fed up of its obsession with phenomena and so co-founded the Theosophical Society in 1875, based in New York. ...read more.

Instead, there were regular splits in the movement and the various splinter groups had a wide range of spiritualist newspapers and periodicals. Some of which undertook social movements but the main purpose of spiritualism was largely forgotten - this being a possible afterlife - in favour of personal promotion as evident by the amount of self-congratulatory columns in spiritualist newspapers42. Although due to its religions principles spiritualism was largely accepted by religion, it was still attacked by some short-sighted clergymen and Pearsall contests that had spiritualism been as arrogant as the Church in the face of harsh criticism then it would have received more credence than it actually did43. Instead, it was only deemed as only being another "nonconformist" movement that posed an empty threat to the Church of England.44 In conclusion, despite the strenuous attempts made by prominent spiritualists to transform their movement into a religion, it ultimately failed. As a result, the attraction of communicating with the spirit world was only a pastime that provided comfort to many. Yet this was only a fashionable pastime and as is typical of fashion, attempts to communicate with the spirit world diminished when new forms of entertainment presented themselves, for example various spectator sports such as football started to grip the nation as a favourite distraction at the turn of the century. Despite this, the impact of spiritualism on the social scene of the Western world was profound, it was conducive to the publishing of famous fictional illustrations like Dracula (1897) and above all, it was a vehicle for various other socially conscious movements such as socialism and greater rights for women to come to the fore of English society. ...read more.