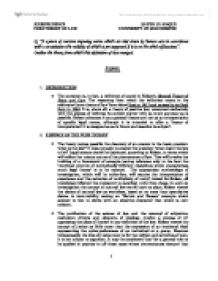 ''A system of coercion imposing norms which are laid down by human acts in accordance with a constitution the validity of which is pre-supposed if it is on the whole efficacious''.

Q: ''A system of coercion imposing norms which are laid down by human acts in accordance with a constitution the validity of which is pre-supposed if it is on the whole efficacious''. Outline the theory from which this definition of law emerged. Answer: 1. INTRODUCTION * The quotation is, in fact, a definition of stated in Kelsen's General Theory of State and Law. The reasoning from which the definition stems in his celebrated 'pure theory of law' formulated first in 1911 and revised in its final form in 1964. It is, above all, a theory of positive law, concerned exclusively with the process of defining its subject matter with as much accuracy as is possible. Kelsen advances it as a general theory and not as an interpretation of specific legal norms, although it is intended to offer a 'theory of interpretation' it is designed so as to 'know and describe its subject'. 2. ESSENCE OF THE PURE THEORY * The theory makes possible the discovery of an answer to the basic question: 'what is the law?' It does not seek to answer the question: 'what ought the law to be?' Legal science should be fashioned, according to Kelsen, in terms which will reflect the unique nature of the phenomenon of law. This will involve the building of a framework of concepts having reference only to the law; the 'uncritical mixture of methodically-different disciplines which characterises much legal theory' is to be rejected. The appropriate methodology of investigation, which will be value-free, will require the interpretation of experience and 'the reduction of multiplicity of unity'; indeed for Kelsen, all knowledge reflected the endeavour to establish unity from chaos. In such an investigation the concept of natural law would have no place. Kelsen viewed the claims of natural law as worthless, based on no more than speculative claims to immutability resting on 'Nature and Reason' concepts which seemed to him to clothe with an objective character that which is non-existent. ...read more.

Rejection of natural law, concern for form and structure, a separating out from legal theory of the social and moral content of law, are obvious in Kelsen's analysis. The pure theory represents, according to Friedmann, 'a quest for pure knowledge in its most uncompromising form, for knowledge free from instinct, volition and desire'. Kelsen's task was to discover what he considered as the true essence of the law and, as a consequence, to reject all that which is clearly in flux or merely accidental. The result is a theory which carries the positivist analysis to an advanced stage and which treats the law, in Bodenheimer's phrase, 'as though it were contained in a hermetically-sealed container'. The pure theory attempts to see law as a systematic, unified concept; a legal order is presented in sparse terms as a system of normative relations whose unity stems from the one reason for the validity of norms- a fundamental norm. The contribution of the pure theory to an understanding of law rests in its enunciation of the relation between the fundamental norm and other, lower norms within the society; it does not pronounce on the 'desirability' of the fundamental norm, for that is a task for the political scientist, not for the jurist. Q: 'An exercise in logic and not in life'. Doest this statement exemplify the criticism directed against the 'pure theory of law'? ANSWER: 1. INTRODUCTION * The quotation comes from Laski's Grammar of Politics, in which he suggests that, given its postulates. Kelsen's 'pure theory' of law is unanswerable, but that its substance is an exercise in logic, not in life. Many of the criticisms directed against the 'pure theory' do rest, indeed, on what is perceived as its aridity and separation from the realities of legal activity within the community. But there are other important criticisms, some of which are mentioned below, based on the implications of Kelsen's methodology of enquiry. ...read more.

If the 'proper business' of a positivist jurist be with the actual operations of the law, then Kelsen might be considered as having contributed little to an understanding of those operations. Allen suggests that, in Kelsen's anxiety to keep perception of the law 'pure', he has raised it to such an inaccessible altitude that 'it has difficulty in drawing the breath of life'. Geny, writing before Kelsen, had warned against the 'palpable illusion' of attempting to erect a pure judicial science on the postulates of 'an inevitable and imperious logic', with the result that what is created is barren and without value. It is, perhaps, this criticism which Laski had in mind in his comment on Kelsen. 10. CONCLUSION (UNACCEPTABLE NARROWNESS OF THE THEORY'S BASE. * It is paradoxical that Kelsen, criticised for remoteness and a prediction for authoritarian jurisprudence, both of which are said to be evident in the 'pure theory', should have been, in fact, a jurist who was intensely concerned with the practicalities of the law. He had rejected authoritarianism by choosing exile from his native Austria which was under totalitarian rule, and he made a fundamental contribution to the legal foundations of the United Nations in hid commentaries on the basis of UN proposals for international security. His concern was to give to legal science a methodology which would enable the law-no matter what its form or origins might be -to be understood. The resulting edifice seems to have been constructed, however, from postulates and perceptions which ignored the peculiar richness and complexities of developed legal systems; its basis is now seen by some jurists as being unacceptably narrow. It may be that any attempt to create a ratified 'pure theory' which involves separating law from custom, tradition, communal conceptions of justice and morality, will succeed only in erecting a system of jurisdictional thought which, no matter how logical its methodology may be, is, in the event at variance with the life of the law. JURISPRUDENCE SAYED-UL-HAQUE PURE THEORY OF LAW UNIVERISTY OF MANCHESTER 1 ...read more.