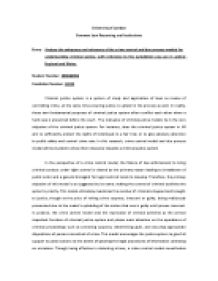 Analyse the adequacy and relevance of the crime control and due process models for understanding criminal justice, with reference to the jurisdiction you are in and/or England and Wales.

﻿University of London Common Law Reasoning and Institutions Essay: Analyse the adequacy and relevance of the crime control and due process models for understanding criminal justice, with reference to the jurisdiction you are in and/or England and Wales. Student Number: 100264036 Candidate Number: L2412 Criminal justice system is a system of study and application of laws as means of controlling crime, at the same time ensuring justice is upheld in the process as well. In reality, these two fundamental purposes of criminal justice system often conflict each other when a hard case is presented before the court. The relevance of criminal justice models lie in the core objective of the criminal justice system. For instance, does the criminal justice system in UK aim to sufficiently protect the rights of individuals to a fair trial, or to give absolute attention to public safety and control crime rate. In this research, crime control model and due process model will be studied to show their relevance towards a criminal justice system In the perspective of a crime control model, the failure of law enforcement to bring criminal conduct under tight control is viewed as the primary reason leading to breakdown of public order and a general disregard for legal controls tends to develop. Therefore, the primary objective of this model is as suggested by its name, making the control of criminal activities the system?s priority. This model ultimately maximizes the number of criminals stopped and brought to justice, though at the price of risking crime suspects, innocent or guilty, being maliciously prosecuted due to the model?s upholding of the notion that one is guilty until proven innocent. In practice, the crime control model sees the repression of criminal activities as the utmost important function of criminal justice system and places main attention on the operations of criminal proceedings such as screening suspects, determining guilt, and securing appropriate dispositions of persons convicted of crime. ...read more.

the article 6 of HRA, if the court allows the legal burden of proof to be shifted from the prosecution to him as instructed by Parliament in the Misuse of Drug Act 1971. As a result, the court decided that instead of imposing a legal burden of proof on the suspect, he was imposed only an evidential burden of proof. Another situation with similar court judgements affected by HRA can also be seen in the case of Sheldrake v DPP (2033). Thus, it can be concluded that while the fundamental values in the present English criminal justice system follow the crime control model, some values of the due process model are still retained by the system, particularly the fairness of trial proceedings which is reinforced by article 3 of the HRA. In Malaysia, the perspective of criminal justice system lies in the due process model, which the fundamental principle in criminal proceeding is such that one will remain innocent until proven guilty. However, like the Misuse Drug Act 1971 in England, various statutes in Malaysia such as the Anti Corruption Act 1997 and Dangerous Drugs Act 1952 will also be able to shift the legal burden of proof to defendants to rebut presumptions of their guilt. In adherence to the rule of law stating that ?no one is above the law?, as government can only legitimately exercise their authority in accordance with due process, the criminal justice system in Malaysia ensures that each criminal is punished in accordance with the law. However, in reality, Malaysia?s criminal justice system lacks efficiency, and there were many notable travesty of justice in the system. The problem mainly lies on the fact that Malaysia has no legitimate form of separation of powers, which sometimes causes Malaysia government bodies as well as even the judiciary to work in favour of each other. Consequently, with the absence of impartiality and independence in Malaysia courts, fundamental justices were sometimes not upheld in criminal proceedings as they were tainted by political influence. ...read more.