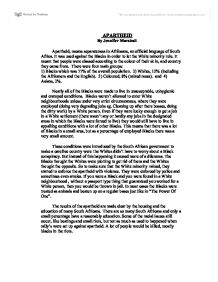 APARTHEID By Jennifer Marshall Apartheid, means separateness in Afrikaans, an official language of South Africa. It was used against the Blacks in order to let the White minority rule. It meant that people were classed according to the colour of their skin, and country they came from. There were four main groups: 1) Blacks which was 77% of the overall population. 2) Whites, 13% (including the Afrikaners and the English). 3) Coloured, 8% (mixed races). and 4) Asians, 2%. Nearly all of the Blacks were made to live in unacceptable, unhygienic and cramped conditions. Blacks weren't allowed to enter White neighbourhoods unless under very strict circumstances, where they were employed (doing very degrading jobs eg. Cleaning up after there bosses, doing the dirty work) by a White person. Even if they were lucky enough to get a job in a White settlement (there wasn't any or hardly any jobs in the designated areas in which the Blacks were forced to live) ...read more.

If you were a Black and you were found in a White neighbourhood , without a passport type thing that guaranteed you worked for a White person, then you would be thrown in jail. In most cases the Blacks were treated as animals and beaten up on a regular bases just like in "The Power Of One". The results of the apartheid are made clear by the housing and the education of many South Africans. There are so many South Africans and only a small percentage have a reasonably education. Some of the racial issues still occur, like beatings and small riots, but not as much as used to happened when rally's were set up against apartheid. A lot of people would be killed, mostly blacks in the riots. Nelson Mandela Nelson Rolihlahla Mandela a political activist, lawyer and a leader was a ruler/leader for the ANC (African National Congress). ...read more.

Nelson Mandela for nearly two decades worked to get together different arguments and to organise antigovernment protests. In 1952, he then started up the first Black law partnership with a colleague of his. Limited by the police on a number of occasions, Nelson went on trial with 156 others on charges of treason. The trial took 6 years to conclude and all of the 157 people were all found not guilty and were let go. Mandela was arrested again in 1962 and was sentenced to 5 years in jail for starting a strike and travelling without the proper documents. As a result of additional charges Nelson Mandela was given a life sentence (June 1964). Following his before mentioned release (see paragraph two) Mandela hosted strategy talks with other ANC leaders from Zambia. He went on a world tour in 1990 to the United States to address the United Nations, in New York and to meet with President George Bush at the White House. ...read more.