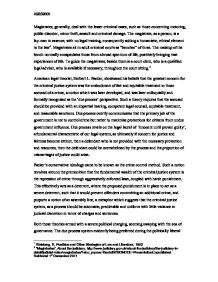 &quot;At the end of the day, the function of the Magistrates court is not to provide due process or crime control, but to exert power. Discuss

Magistrates, generally, deal with the lesser criminal cases, such as those concerning motoring, public disorder, minor theft, assault and criminal damage. The magistrate, as a person, is a lay-man in essence, with no legal training, consequently adding a humanistic, ethical element to the law[1]. Magistrates sit in adult criminal courts as “benches” of three. The makeup of the bench normally encapsulates those from a broad spectrum of life, positively bringing vast experiences of life. To guide the magistrates, beside them is a court clerk, who is a qualified legal adviser, who is available if necessary, throughout the court sitting.[2]

American legal theorist, Herbert L. Packer, showcased his beliefs that the greatest concern for the criminal justice system was the embodiment of fair and equitable treatment to those accused of a crime, a notion which was later developed, and was later colloquially and formally recognised as the ‘due process’ perspective. Such a theory requires that the accused should be provided with an impartial hearing, competent legal counsel, equitable treatment, and reasonable sanctions. Due process overtly communicates that the primary job of the government is not to control crime but rather to maximise protections for citizens from undue government influence. Due process revels on the legal laurel of ‘innocent until proven guilty’, a fundamental characteristic of our legal system, as ultimately if concern for justice and fairness become extinct, then a defendant who is not provided with the necessary protection and resources, then the defendant could be overwhelmed by the process and the proportion of miscarriages of justice could arise..

Packer’s conservative ideology came to be known as the crime control method. Such a notion revolves around the premonition that the fundamental wealth of the criminal justice system is the repression of crime through aggressively enforced laws, coupled with harsh punishment. This effectively acts as a deterrent, where the proposed punishment is in place to act as a severe deterrent, such that it would prevent offenders committing an additional crime, and purports a notion of an assembly line, a metaphor which suggests that the criminal justice system, as a process should be automatic, predictable and uniform with little variance in judicial discretion in terms of charges and sentences.

Both these theories armed with a severe political charging, seeming swaying with the sea of governance. The due process system evidently being preferred during the politically liberal 1960s, however from the mid-1970s up until the early twenty first century, conservatism has been ever present, remaining resolute as the dominant political philosophy, with criminal justice policies reflecting the crime control theory.

However which of these approaches is ostensibly apparent within the district of the magistrates’ court, or is it unclear so far as to dictate that the general consensus communicated is the magistrate’s ‘merely’ exerting its power?

Although, there have been an abundance of theories relating to the process of criminal justice, it is clear that Packer’s models are the most enduring theoretical frameworks[3]. Upon visiting Newcastle Magistrates Court, it is clear that perhaps to pigeon hole the criminal justice system, merely being reflective in two conflicting methods, unimaginative and inefficient. The laurels of criminal justice, in the modern political era, even within the magistrate arena, to me reflect a mix of due process combined with the European Convention on Human Rights, and the United Kingdom’s response the Human Rights Act 1998, which set about introducing human rights, making it easily accessible to the lay man.

Modern day, it is clear that the criminal justice purpose is changing, and therefore the complexity of definition is inevitable. The then Lord Chancellor, Jack Straw, drew allusions to the fact that the crime control method as a bulwark of justice was reaching the emphatic end of its rule, with a seeming reversion to the due process theory, effervescent in the 1960s,

‘We are blessed in the United Kingdom by a judiciary whose integrity, independence, professionalism and skill are not in question. But we take such a condition for granted at our peril. Justice is a delicate plant. It has to be nurtured, protected and cared for.’[4]

With such a speech echoing remnants of due process and crime control, it is clear that there is no clear recommendation, however the main point to highlight is the protection of the individual in light of an omnipotent state.

It is clear that the emergence of human rights, has had a stark effect on the criminal justice system, determining that there must be a balance of ‘conflicting criminal justice aims and interests should not be driven by consequentialist calculations of which set of arrangements would produce the most overall benefit to society’[5], fundamentally translated from the framework, that an individual’s rights must be assigned some special weight in the balancing process.

Furthermore, upon witnessing the judicial system in action, it is difficult to circumscribe to one main theory standing resolutely as paramount to the criminal justice system. There is a deadly balance to be struck. Ultimately, I would contest that the two are inextricably linked, with the need for a deadly balance to be struck. It is clear that the crime control process, is undoubtedly advantageous in particular with its repression of criminals, and has remnants of a successful justice model. However the due process notion also has its hallmarks, with the necessity of protecting the individual against an all-powerful state, emphasising immediate democratic worth. The crime control method obviously has its flaws, wrongful convictions due to the speed it operates, and the restriction of the rights of the accused, and with such, in my mind, within the boundaries of the magistrate court, there does seem to be a return to due process model due to the Human Rights Act 1998, bearing its armoury in an attempt to ward off state abuse.

Weisberg, R, Poethics and Other Strategies of Law and Literature, 1992

[1] Weisberg, R, Poethics and Other Strategies of Law and Literature, 1992

[3] Roach, K, Due Process and Victims’ Rights: The New Law and Politics of Criminal Justice, 1996