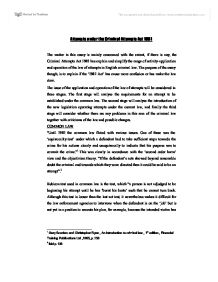 Attempts under the Criminal Attempts Act 1981

Attempts under the Criminal Attempts Act 1981 The matter in this essay is mainly concerned with the extent, if there is any, the Criminal Attempts Act 1981 has explain and simplify the range of activity-application and operation of the law of attempts in English criminal law. The purpose of the essay though, is to explain if the '1981 Act' has cause more confusion or has make the law clear. The issue of the application and operation of the law of attempts will be considered in three stages. The first stage will analyse the requirements for an attempt to be established under the common law. The second stage will analyse the introduction of the new legislation operating attempts under the current law, and finally the third stage will consider whether there are any problems in this area of the criminal law together with criticisms of the law and possible changes. COMMON LAW "Until 1981 the common law flirted with various issues. One of these was the 'equivocality test' under which a defendant had to take sufficient steps towards the crime for his actions clearly and unequivocally to indicate that his purpose was to commit the crime."1 This was clearly in accordance with the 'second order harm' view and the objectivism theory. "If the defendant's acts showed beyond reasonable doubt the criminal end towards which they were directed then it could be said to be an attempt".2 Rubicon test used in common law is the test, which "a person is not adjudged to be beginning his attempt until he has 'burnt his boats' such that he cannot turn back. ...read more.

These are the cases typified by purchasing talcum powder (thinking that it is heroin), putting sugar in an enemy's coffee (thinking that it is cyanide), or administering a harmless substance to a pregnant (thinking that it is an abortifacient). If these innocuous actions are criminal, it is only because the actor entertains certain thoughts: he wants to engage in an action that would clearly be criminal, if the facts were, as he believed them to be"16. CONCLUSION "The principal provisions of the Criminal Attempts Act 1981, which it is suggested that it has make the law clear from the common law, are: (a) the definition of the mens rea"17, clearly means that the prosecution must prove that the accused intended the result, defined in the actus reus of the full offence (s.1 (1) of the Act). (b) "The establishment of a new test of the actus reus"18 which is defined in s.1 of the 1981 Act as doing 'an act which is more than merely preparatory to the commission of the offence'. "It need not be a dangerous act. It is the mens rea, which converts the act into a crime. I may be driving my car towards to you. Only if the jurors know that I intent to run you down, can they convict of an offence. By s. 4(3) of the Act, the question whether the accused committed an attempt is for the jury, provided that there is sufficient evidence in law to support that finding: that is, the judge can rule that the act may but it is for the jury to determine that it was so. ...read more.