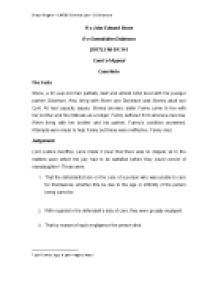 Case Note - Stone &amp; Dobinson 1977. The details contained in this case are very emotive and raise some important issues surrounding the issue of care and the duty owed to a person who is unable to care for themselves

﻿Shaun Rogers ? LW508 Criminal Law ? D.Dinsmore R v John Edward Stone R v Gwendoline Dobinson [1977] 2 All ER 341 Court of Appeal Case Note The Facts Stone, a 67-year-old man partially deaf and almost blind lived with his younger partner Dobinson. Also living with Stone and Dobinson was Stones adult son Cyril. All had capacity issues. Stones anorexic sister Fanny came to live with her brother and his mistress as a lodger. Fanny suffered from anorexia nervosa. When living with her brother and his partner, Fanny?s condition worsened. Attempts were made to help Fanny but these were ineffective. Fanny died. Judgement Lord Justice Geoffrey Lane made it clear that there was no dispute as to the matters upon which the jury had to be satisfied before they could convict of manslaughter.[1] These were, 1. That the defendants took on the care of a person who was unable to care for themselves, whether this be due to the age or infirmity of the person being cared for. 1. With regards to the defendant?s duty of care, they were grossly negligent. 1. That by reason of such negligence the person died. ...read more.

However, the court showed mercy to Stone by reducing his sentence to 12 months instead of the original sentence of three years. This was partly done due to Stone being greatly handicapped.[13] Commentary The details contained in this case are very emotive and raise some important issues surrounding the issue of care and the duty owed to a person who is unable to care for themselves. This is an issue that often gets media coverage, particularly where elderly people are concerned. On one side of this argument we have an elderly couple who felt that they were under no obligation to provide a duty of care to a lodger who was also a relative to one of the appellants, their argument being that the deceased never kicked up a fuss and that they were not to know they had a duty to provide care. On the other side we have the state telling them that they did and that they should of been aware of this, especially when over a period of time the deceased?s condition started to deteriorate rapidly. The judgement is a tricky one for Lord Justice Geoffrey Lane who relied solely on case law when making his decision, arguably very little case law. ...read more.

Facts-wise, this essay is very good. But the commentary lets it down, and does not address any of the criticisms of the judgment. There is a well-developed strain of feminist theory, related to the case, that could have been addressed, for example.