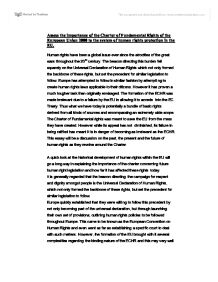 Charter of the fundemental rights of the Eu

Assess the importance of the Charter of Fundamental Rights of the European Union 2000 to the system of human rights protection in the EU. Human rights have been a global issue ever since the atrocities of the great wars throughout the 20th century. The beacon directing this burden fell squarely on the Universal Declaration of Human Rights which not only formed the backbone of these rights, but set the precedent for similar legislation to follow. Europe has attempted to follow in similar fashion by attempting to create human rights laws applicable to their citizens. However it has proven a much tougher task than originally envisaged. The formation of the ECHR was made irrelevant due to a failure by the EU in allowing it to accede into the EC Treaty. Thus what we have today is potentially a bundle of basic rights derived from all kinds of sources and encompassing an extremely wide scope. The Charter of Fundamental rights was meant to save the EU from the mess they have created. However while its appeal has not diminished, its failure in being ratified has meant it is in danger of becoming as irrelevant as the ECHR. This essay will be a discussion on the past, the present and the future of human rights as they revolve around the Charter. A quick look at the historical development of human rights within the EU will go a long way in explaining the importance of the charter concerning future human right legislation and how far it has affected these rights today. ...read more.

Surely this constitutes a doctrine of some sort upon which the courts and the people may come to rely on for guidance? While the ECHR may certainly qualify as such a policy, the ECJ categorically disagrees with this. In the infamous Opinion 2/94,7 the ECJ were called to look at the issue of whether the community should allow the accession of the ECHR into EC law. The courts held that 'as Community law now stands, the Community has no competence to accede to the European Convention for the Protection of Human Rights and Fundamental Freedoms.'8 Several reasons were given for this conclusion, the most central of which included the fact that under Article 3(b) of the EC Treaty, the community is to act within the scope of its powers as defined by the provisions of the Treaty and nothing else. They could not simply expand their scope so as to include other agreements. Moreover, the judges agreed that having granted the ECHR special community relevant status in previous case law9, this would be as far as it would go without being proclaimed legally binding. Craig and De Burca also objected to accession claiming that the ECJ and ECtHR should identify themselves as separate legal entities watching over certain rights that would be relevant to their jurisdiction.10 In this case, the ECJ would protect market interests and the application of EC Law while the ECtHR could focus on human rights issues. ...read more.

However, having been signed and 'solemnly proclaimed' by the big three institutions of the EU (the European Parliament, the Council of the European Union, and the European Commission), irritably, the Charter has not been ratified and until this occurs, it will not bear the tag of being a legal document. The 'solemn proclamation' of the institutions is at best ambiguous and may even appear to be irrelevant if the Charter does not become legally binding. How annoying it must be to finally sort out the human rights spectrum that has for long plagued the establishment, yet fall short of the legal categorization. Nonetheless, the signs for the future are looking extremely bright and while the initial assessment of its impact appeared to be close to failure, the Charter has become more involved in human rights jurisprudence and is meriting more attention than ever before. It has wasted no time in making its way into various EU courts, such as the Court of First Instance, as well as several Advocates General who refer to them during preliminary hearings of cases going to the ECJ. One of the first CFI cases to mention the Charter was Max.mobil Telekommunikation service,17 while according to the European Commission website, the European Court of Human Rights made a reference to the Charter in a case concerning the marriage of transsexuals.18 The Charter was quickly gaining momentum and was fast encompassing relevant legislation. ...read more.