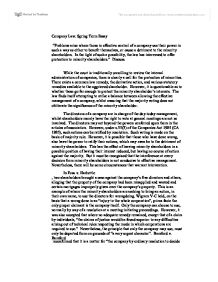 Company Law: Spring Term Essay "Problems arise where those in effective control of a company use their power in such a way as either to benefit themselves, or cause a detriment to the minority shareholders. In the light of such a possibility, the law has intervened to offer protection to minority shareholders." Discuss. While the court is traditionally unwilling to review the internal administration of companies, there is clearly a call for the protection of minorities. There exists a common law remedy, the derivative action, and various statutory remedies available to the aggrieved shareholder. However, it is questionable as to whether these go far enough to protect the minority shareholder's interests. The law finds itself attempting to strike a balance between allowing the effective management of a company, whilst ensuring that the majority voting does not obliterate the significance of the minority shareholder. The directors of a company are in charge of the day-today management, whilst shareholders merely have the right to vote at general meetings are not so involved. The directors may act beyond the powers conferred upon them in the articles of association. However, under s.35(3) of the Companies Act 1985 (CA 1985), such actions can be ratified by resolution. Such voting is made on the basis of majority rule. However, it is possible that those who have done wrong, also have the power to ratify their actions, which may even be to the detriment of minority shareholders. This has the effect of leaving minority shareholders in a possible position of having their interest reduced, but having no course of action against the majority. ...read more.

The company could feasibly pass a resolution that everything must be given to them, and that the minority should have nothing to do with it. Protection was again clearly needed, to prevent the "majority [putting] something into their pockets at the expense of the minority". A derivative action was allowed. Furthermore, Daniels v. Daniels expanded upon the notion of not allowing directors to benefit from their actions. It was held that despite the absence of fraud, minority shareholders were able to bring a derivative action to claim breach of duty. The reasoning was that if a minority shareholder can sue for fraud, there is no reason why he "can't sue where the action of the majority and the directors confers some benefit on themselves". The rule in Foss v. Harbottle was excepted because the law cannot allow a director to make a profit out of their negligence. It could be argued that this question should have been left for the company to decide by a majority vote, but it must be noted that there would be no other remedy. However, it must be noted that these exceptions are not twisted to cover all occasions where the director might act to the detriment of the minority shareholder. Pavlides v. Jensen held that the individual plaintiff may not sue when the claim is based on negligence. Whether proceedings should be taken against the directors, who were guilty of negligence, "is a matter of internal management". However, it was noted that in certain cases, the court must go "behind the apparent ownership of shares in order to discover whether a company is in fact controlled by wrongdoers". ...read more.