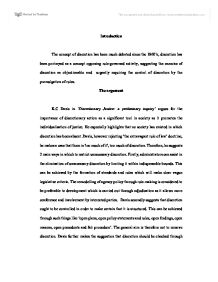 Introduction The concept of discretion has been much debated since the 1960's; discretion has been portrayed as a concept opposing rule-governed activity, suggesting the exercise of discretion as objectionable and urgently requiring the control of discretion by the promulgation of rules. The argument K.C Davis in 'Discretionary Justice: a preliminary inquiry' argues for the importance of discretionary action as a significant tool in society as it promotes the individualisation of justice. He especially highlights that no society has existed in which discretion has been absent .Davis, however rejecting 'the extravagant rule of law' doctrine, he makes a case that there is 'too much of it', too much of discretion. Therefore, he suggests 2 main ways in which to restrict unnecessary discretion. Firstly, administrators can assist in the elimination of unnecessary discretion by limiting it within indispensable bounds. This can be achieved by the formation of standards and rules which will make clear vague legislative criteria. The remodelling of agency policy through rule-making is considered to be preferable to development which is carried out through adjudication as it allows more conference and involvement by interested parties. Davis secondly suggests that discretion ought to be controlled in order to make certain that it is structured. This can be achieved through such things like 'open plans, open policy statements and rules, open findings, open reasons, open precedents and fair procedure'. The general aim is therefore not to remove discretion. ...read more.

The verdict of the Court of Appeal maintained that an inflexible policy was disproportionate and contradictory in the theory as it was unsuccessful in providing the individual consideration necessary to fulfil its own key aim, which was protecting the wellbeing and welfare of the child. The judgment of the House of Lords in Daly as well concerned a human rights based challenge to a rigid policy. The policy required prison officers to inspect a prisoner's legal correspondence without the presence of the prisoner. It was held by the court that such a blanket policy is unlawful as it results in a disproportionate interference with the prisoners' rights. It was further concluded that in English law, a public organisation entrusted with statutory discretionary powers is constrained from implementing a policy or a rule which allows it to reject a case without considering the merits of the individual claimant. Following on, Feldman in Discretions, choices and values proposes an interesting argument. He discusses formal constraints which arise as a result of the official purposes of the organisation. Feldman argues that these may lead to the restriction of the scope or seeking justice for the individual claimant (a well-known rationalization for discretion), as individualised justice may possibly result in the development of injustice between claimants. An example put forward by Griffith is that, managers make employees aware of the goals through training and monitoring. ...read more.

It would therefore appear that rules preserve consistency whilst promoting unfairness. West concludes that when reviewing the qualities, by which rule-based decision- making is valued, the majority of its aims 'conflict with most of the others.' Conclusion It has become clear through the research on this topic that rules are not merely the antithesis of discretion, and rules cannot replace discretion. Generally rules embody discretion as rules are rarely formulated with enough exactitude to eradicate discretion. The exercise of discretion is therefore inevitable as discretion is logically necessary when enforcing rules. Discretions are inherent in the structure of rules; the option to formulate rules, 'policy discretion', may, for instance, be transferred throughout the entire system: 'from lower levels officials to higher ones, or onto judges, or onto Parliament, or whatever,' as it cannot be completely eradicated. 'Judgement discretion', exercised each time rules are interpreted is similarly difficult to eliminate, as remarked by Cohen, 'judges are not slot machines'. Furthermore, even when the court applies precise and unambiguous rules, they have at their disposal doctrines, such as the principle of human rights to alter the rules. Also as implied by Goodin every unacceptable feature of discretion such as inaccessibility, inequality, arbitrariness and uncertainty, are all achievable in a rule-based decision-making system. With the final words of Baldwin, 'Rules may commence life as short, clear statements but they tend to become less accessible and more fudged as powerful interests are accommodated and political flak is side-stepped. ...read more.