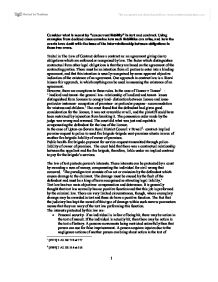 Consider what is meant by concurrent liability in tort and contract. Using examples from decided cases examine how such liabilities can arise, and how the courts have dealt with the issue of the interrelationship between obligati

Consider what is meant by "concurrent liability" in tort and contract. Using examples from decided cases examine how such liabilities can arise, and how the courts have dealt with the issue of the interrelationship between obligations in these two areas. Treitel in The Law of Contract defines a contract as: an agreement giving rise to obligations which are enforced or recognised by law. The factor which distinguishes contractual from other legal obligations is that they are based on the agreement of the contracting parties. There must be an intention from all parties to enter into a binding agreement, and that this intention is usually recognized by some apparent objective indication of the existence of an agreement. One approach in contract law is a liberal laissez-fair approach, in which anything can be used in assessing the existence of an agreement. However, there are exceptions to these rules. In the case of Tanner v Tanner1 - ' landlord and tenant- the general law- relationship of landlord and tenant- leases distinguished from licences to occupy land- distinction between licence and lease- particular instances- occupation of premises- or particular purpose- accommodation for mistress and children.' The court found that the defendant had given good consideration for the licence, it was not revocable at will, and the plaintiff could have been restrained by injunction from breaking it. The possession order made by the judge was wrong and reversed. The court did what was just and equitable compensating the defendant for the loss of the licence. In the case of Upton-on-Severn Rural District Council v Powell2- contract-implied promise-request to police to send fire brigade-brigade sent-premises situate in area of another fire brigade-liability of owner of premises. ...read more.

In the case of Tai Hing Cotton Mill Ltd v Liu Chong Hing Bank Ltd12, Lord Scarman giving the opinion of the Privy Council, said " Their Lordship do not believe that there is anything to the advantage of the law's development in searching for liability I tort where the parties are in a contractual relationships...their Lordships believe it to be correct in principle and necessary for the avoidance of confusion in the law to adhere to the contractual analysis: on principle because it is a relationship in which the parties have, subject to a few exceptions, the right to determine their obligations to each other, and for the avoidance of confusion because different consequences do follow according to whether liability arise in contract or tort, e.g., in the limitation of action". In Tai Hing, the plaintiff was seeking to establish liability in tort which went further than the liability established by the contract between the parties. The case does not deal with the position between professional and client and is probably best interpreted as meaning that liability in tort cannot be imposed which contradicts the express terms of the contract. The case does not prevent a plaintiff from taking advantage of a tortuous duty which is the same as a contractual duty in order to use advantageous rules such as limitation periods. In Henderson v Merrett Syndicates Ltd, 13the House of Lords held that sub-agents acting on behalf on indirect Lloyd's names owed a duty of care in negligence to the names, even though they were not in a contractual relationship with the names. ...read more.

who was the assured, PNB or Esal? (2) Whether PNB had a contractual or tortious relationship with B and D and/or the two brokerage firms? Four policies of insurance were at issue; two on FE Wright slips and the third and fourth on Fielding slips. The first two policies referred to the assured as "Punjab National Bank a/c Esal (Commodities) Ltd". The court held that (1) PNB was the assured party despite the ambiguous nature of the first two policies. The argument that the court should refer to the slips which evidenced the contracts was rejected. The intention of the parties made it clear that PNB was the assured. (2) It was established law that an insurance broker owed a duty of care to his client, Vesta v Butcher [1988] 1 Lloyd's Rep. 19 and subsequent cases. Thus, B and D as individuals owed PNB duties in tort and were personally liable for any carelessness in effecting the four policies. B and D's employers owed a corresponding duty in tort. D and B were not liable to PNB in contract; the contracts were between PNB and FE Wright and subsequently PNB and Fielding. That B and D's contracts with FE Wright had been terminated did not affect the contractual relationship between FE Wright and PNB because Wright failed to inform PNB of the change in B and D's status. Conclusion I think that it would be a fair and reasonable to say that over the past forty years the decisions reached at court have profoundly changed in tort, contract and concurrent liability. There are many possible reasons why this has happened. One possible reasons it that, you can say the norms and values of society has changed, therefore reflecting changes on the economic structure and infrastructure. ...read more.