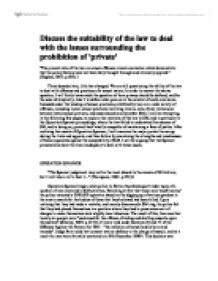 Discuss the suitability of the law to deal with the issues surrounding the prohibition of 'private' "The present state of the law on sexual offenses reveals anomalies which demonstrate that the policy factors have not been fully thought through and rationally applied." (Hughes, 1962: p.685).1 Three decades later, little has changed. We are still questioning the ability of the law to deal with offenses and practices of a sexual nature. In order to answer the above question, I will firstly leave aside the question of how privacy should be defined, and for the sake of simplicity, take it to define what goes on in the context of one's own home. Included under the heading of sexual practices prohibited by law are a wide variety of offenses, including incest, sexual practices involving minors, acts of anal intercourse between heterosexual partners, and sadomasochism (hereafter SM). I will be attempting, in the following few pages, to explore the reactions of the law to SM, and in particular to the Operation Spanner proceedings, where the law failed to understand the essence of SM, and in doing so, proved itself wholly incapable of maintaining a face of justice. After outlining the events of Operation Spanner, I will examine the major points thrown up during the trials and appeals, and then follow by examining the strengths and weaknesses of these arguments against the acceptability of SM. I will be arguing that the Spanner prosecutions show the laws inadequacy to deal with these issues. OPERATION SPANNER "The Spanner judgement may not be the most absurd in the annals of British law, but it will take a lot to beat it..." (Thompson, 1994: p.234)2. Operation Spanner began when police in Bolton 'stumbled upon' video tapes of a number of men involved in SM activities. Believing at first that these were 'snuff movies' the police mounted a �500,000 operation based on the digging up of various gardens in the area to search for the bodies of those that they believed had been killed. ...read more.

sexual agent, able to decide for themselves who to take as sexual partners, an argument which should so long as all parties involved have consented, also protect their evaluation of what counts, for them, as meaningful sexual activity, whether sado-masochistic or otherwise." (p.663). The main problem with the ruling of consent as no defence is that it shows up the prejudices of the judicial system in a most noticeable light. If, as has now happened, SM is pronounced outside of the realms of consensual defence, this same ruling would have to be applied across a wide range of other, related behaviours and practices, in order for the law to lose its label of bias in this area (if not its label of absurdity). Under laws effectively created during the proceedings of R. v. Brown, (although this in itself should not occur, it is not for judges to create new law), teenagers should be arrested and prosecuted for giving 'lovebites', while married couples would be officially convicted of assault if they were found to be involved in the spanking of each other in the 'privacy' of their own bedroom. More significantly, in the field of sporting activities, the famous boxers we see on our television screens could be sentenced to up to five years imprisonment for grievous bodily harm, and if, as has tragically happened in the past, boxer should be killed, this could amount to charges of manslaughter, or even murder being brought against the opponent. According to the laws created during R. v. Brown, boxers could be arrested and charged any day now, yet they are not - no charges are brought for these 'sporting' activities because boxing has escaped the implications of this ruling. It is described as 'good reason' for assault, as it is a 'manly sport'. Lord Mustill stated that boxing is excluded from these laws because "society chooses to tolerate it", yet it would seem nearer to the mark to say that the reason it is excluded from the laws is because those in high positions in the judicial system choose to tolerate it. ...read more.

(quoted in Edwards: p.407). It is sad, then, that Lords Slynn and Mustill were overruled in the House of Lords, as they were the first, during R. v. Brown to recognise that SM should not be a matter for the criminal court, whatever their personal feelings for SM happened to be. Leslie Moran suggests that the ruling that consent was not available for use by the defendants in R. v. Brown was "nothing more than an arbitrary judicial assertion" (Moran: p.8). We have also seen, not only that the rulings on the defence of consent mere judge-made law, but that this rule is not even universally applied, but rather that it is applied only to area where the judges and Lords cannot cope. For these reasons, the rulings should not form the basis of future proceedings, however we cannot tell the extent to which this ruling on consent will be upheld in the years to come. However, the future for a legality of SM practices continues to look bleak, as the government are unlikely to pass any new laws recommending the "application of sado-masochism to the classic libertarian doctrine" as it is, at the moment, "unlikely to prove a vote-winner" (Bibbings & Alldridge: p.365). In the meantime, those who practice SM are at risk of being sucked into a legal system that does not understand the nature of the sado-masochistic emotions and behaviours, and therefore seeks to make it a prohibited sexual practice. If "the dead eyes of the law cannot see S/M even though it is brought within its gaze" (Stanley: p.226), how can we hope that the judicial system can act competently when dealing with the issue of SM at all? The answer to the question of whether the law is suitable to deal with the issues surrounding the prohibition of private sexual practices, is, in the case of SM, a most emphatic No! The British judicial system, as it now stands, is not only unsuitable to deal with such issues, but wholly incapable of overcoming its prejudices long enough to comprehend them. ...read more.