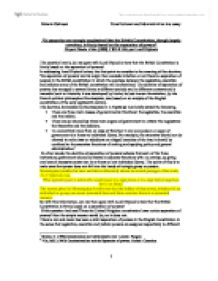 Do we agree with Lord Diplock's view that the British Constitution is firmly based on the separation of powers?

"It cannot be too strongly emphasised that the British Constitution, though largely unwritten, is firmly based on the separation of powers" Duport Steels v Sirs [1980] 1 WLR 142, per Lord Diplock The question here is, do we agree with Lord Diplock's view that the British Constitution is firmly based on the separation of powers? In addressing Lord Diplock's view, the first point to consider is the meaning of the doctrine, 'the separation of powers' and its origin then consider whether or not there's a separation of powers in the British constitution in which the overlaps between the legislative, executive and judiciary arms of the British constitution will be examined. The doctrine of separation of powers has emerged in several forms at different periods and in different contexts and is traceable back to Aristotle; it was developed by Locke; its best known formulation, by the French political philosopher Montesquieu, was based on an analysis of the English constitution of the early eighteenth century. The doctrine, formulated by Montesquieu in L'Espirit des Lois briefly stated the following. * There are three main classes of governmental functions: the legislative, the executive and the judicial. * There are (or should be) three main organs of government in a State: the Legislature the Executive and the Judiciary. * To concentrate more than on class of function in any one person or organ of government is a threat to individual liberty. For example, the executive should not be allowed to make laws or adjudicate on alleged breaches of the law; it should be confined to the executive functions of making and applying policy and general administration.1 In other words, the doctrine of separation of powers believes that each of ...read more.

[1994, p 18]9 However, this overlaps will no longer exist, as the judicial function of the Lord Chancellor is to be abolished and replaced by a Secretary of State for Constitutional Affairs which means he will not fulfil the judicial function or role of the Speaker of the House of Lords. There is already a temporary exercise where the office of Lord Chancellor gained a temporary reprieve and Lord Falconer of Thornton was appointed as the new Secretary of State for Constitutional Affairs.10 The doctrine of separation of powers provides that the judiciary should not have law making power. However, judges in a sense do have a law making power as they can develop common law. The 'declaratory' theory of precedent - the theory that judges do not make law, but only declare the common law or common customs of the realm - persisted, into the 19th century, but is more generally recognised that the judges in the UK do exercise some law making function, with the intent acquiescence of Parliament.11 A striking example of this creative function was the House of Lords decision in Burmah Oil v Lord Advocate12where the House of Lords held that the oil company had a common law right to be compensated for the destruction of the installation by British forces which were acting under prerogative.13This case illustrates how the courts may develop common law in order to take account of new situations. Equally, however, the courts have been prepared to rely on the doctrine of the separation of powers to justify a refusal to create new rights. Hence in Malone v Metropolitan Police Commissioner14. ...read more.