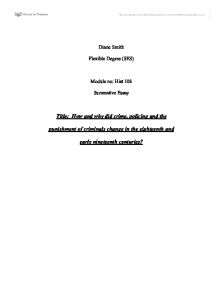 How and why did crime, policing and the punishment of criminals change in the eighteenth and early nineteenth centuries?

Diane Smith Flexible Degree (SES) Module no: Hist 108 Summative Essay Title: How and why did crime, policing and the punishment of criminals change in the eighteenth and early nineteenth centuries? Crime, Policing and punishment of criminals changed quite dramatically during the eighteenth century and early nineteenth century. The changes were brought about by various developments, changes in law, attitudes towards crime and changes in administration would all have an effect on the number of criminal cases brought to prosecution. Other changes like the introduction of rewarding people for information resulting in prosecution, and schemes that help to pay people's court costs encouraged more people to prosecute. There was an increase in the number of magistrates, the introduction of police forces in every borough and more publicity in the newspapers. These factors all encouraged people to prosecute and increase the number of criminal convictions. The only problems that were apparent were the problems that while the people were being encouraged to prosecute, many of them already had an inbuilt distrust of authority and many were developing a changing attitude towards capital punishment, which was used as a general punishment for robbers and thieves. It is because of these conflicting attitudes; the actual true picture of crime levels became hard to record. Levels that were recorded show that there were low levels of crime being committed and prosecuted; approximately 100 per year were recorded. ...read more.

They were also seen as too idle to work in many places. Authorities were often viewed as being weak. Men committed more than 75% of the recorded crimes. Women were much less likely to be convicted of violent crime. Married women were also unable to be held responsible for offences that were committed in the presence of their husbands and women's activity beyond their home was restricted by various constraints. The lure of the capital for single women to seek employment was hindered by the inequality of wages between men and women. Demand on markets increased opportunity but decreasing demand meant employment opportunity was scarce. Women were more vunerable to economic decline and many of them turned to prostitution while some of them turned to theft. Whether a prisoner committed for trial was held in jail or allowed to receive bail depended largely on the offence they were charged with. Although statutes concerned with particular offences might establish punishment that was peculiar to them, the broad regulation laid down on the statute of Westminster 1(1725) and confirmed in the first Marian statute was that bail was not to be allowed in grounds of any seriousness, are certainly not a felony, that is except in open Court and by two justices acting together Prisoners were segregated on arrival at jail and many were put into solitary confinement for long periods of time as a means of forcing repentance for their actions, although this was later abolished as too many prisoners were driven insane. ...read more.

The abolition of the death penalty was argued for by many reformers, but was only abolished for pick pockets in 1808, but kept for other 'Capital Offences' as they were known. Conclusion: The rising crime figures could be attributed to many factors. The increase of Industrialisation and urbanisation meant that there were more people and more opportunity for crime to take place in the industrialised cities. Rural crime was less as many of the offences that were committed were out of sheer desperation and destitution, it would probably be the theft of a pig or a sheep to feed ones family that they would see as inevitable. Many of the crimes went unpunished in the eighteenth century, as people could not afford the legal costs of prosecution. Urban crime tended to be more prolific and often more violent, but a lot of it was carried out through sheer greed rather than necessity. An exception to this would be the single women who turned to prostitution in times of economic decline. The revision of the laws and the abolition of the Bloody Code meant that more and more laws were being introduced and more activities were being classed as illegal, as a form of social control and to allay fears of a moral panic. The improvements made in the housing of prisoners acknowledged the fact that even prisoners had rights. The introduction of Police forces for every borough heightened awareness both of crime and the methods of punishment that would be carried out if one were to be prosecuted. ...read more.