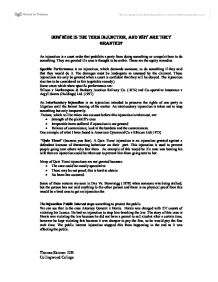 How wide is the term injunction, and why are they granted?

How wide is the term injunction, and why are they granted? An injunction is a court order that prohibits a party from doing something or compels them to do something. They are granted if a case is thought to be unfair. These are the equity remedies. Specific Performance is an injunction, which demands someone, to do something if they said that they would do it. The damages must be inadequate as assessed by the claimant. These injunctions are only be granted when a court is confident that they will be obeyed. The injunction also has to be considered as fair (equitable remedy). Some cases which show specific performance are: Wilson v Northampton & Banbury Junction Railway Co. ...read more.

An example of this would be if a man was beating his wife then an injunction could be taken out to prevent him from going near to her. Many of Quia Timet injunctions are not granted because: * The case could be mostly speculative * There may be not proof, this is hard to obtain * No harm has occurred. Some of these reasons are seen in Day Vs. Brownrigg (1878) when someone was being stalked, but the person has not said anything to the other person and there is no physical proof then this would be a hard case to get an injunction for. The injunction Public Interest stops something to protect the public. ...read more.

The Anton Piller case is used in the cases where the court believes there is a danger that the person will remove or destroy evidence in the form of documents or movable property such as money, papers or illegal copies of film. The defendant is only required to allow the plaintiff to carry out a look of the property. The Mareva Order is when the third persons assets are frozen. The Mareva injunction stopped the boat in the Mareva v International bulk carrier's case from leaving the port. The factors, which have to be taken into consideration before applying for a Mareva injunction, are that there is a high risk that the goods are going to disappear. An example of this is if the ship was booked into another port in a few days time. Thomas Skinner 12B Collingwood College ...read more.