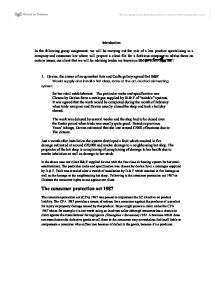 In the following group assignment, we will be carrying out the role of a law practice specializing in a company and consumer law where will prepare a client file for a fictitious company to advise them on certain issues

Introduction In the following group assignment, we will be carrying out the role of a law practice specializing in a company and consumer law where will prepare a client file for a fictitious company to advise them on certain issues, our client that we will be advising trades are known as Bodgit and Frogg Ltd . 1. Davina, the owner of an upmarket Arts and Crafts gallery agreed that B&F Would supply and install a first class, state of the art, ducted air heating system for her retail establishment. The particular make and specification was Chosen by Davina from a catalogue supplied by B & F of "suitable" systems. It was agreed that the work would be completed during the month of February when trade was poor and Davina usually closed the shop and took a holiday abroad. The work was delayed by several weeks and the shop had to be closed over the Easter period when trade was usually quite good. Based on previous Years' takings, Davina estimated that she lost around �7000 of business due to The closure. Just a month after installation the system developed a fault which resulted in fire damage estimated at around �20,000 and smoke damage to a neighbouring hat shop. ...read more.

As such the law expects that the buyer will protect themselves in the sales contract against the defects they cannot possibly access prior to purchase. The term latent defect often used as a part of guarantee clauses in a sales contract so, the buyer can recover damages from the seller if defects turn up after the sale. There is no automatic right for the buyer to claim against the latent defects when they are discovered, absent in agreement in contract. Exemption clauses An exemption clause is a term in a contract which seeks to exemption of the parties from liability such as breach of warranty, negligence, or theft of goods. An exemption clause may become the term of contract by signature or by notice. If a person signs a document he is bound by it even if he does not read it. L 'ESTRANGE V GRAUCOB (1934) P, who was a proprietor of a cafe, purchased a cigarette vending machine. He signed without reading, a sales agreement which contained a large amount of 'small print' .the machine was defected but the vendor was held to be protected by an exemption clause contained in that small print. If a person's signs a contractual document then they are bound by its terms, even if they do not read it. ...read more.

The other terms of the contract, 2. The terms of any other contract on which the contract depends, 3. The balance of the parties' interests, 4. The risks to the party adversely affected by the term, 5. Other ways in which the interests of the party adversely affected by the term might have been protected, 6. The extent to which the term (whether alone or with others) differs from What would have been the case in its absence. 7. The knowledge and understanding of the party adversely affected by the term, 8. The strength of the parties' bargaining positions, 9. The nature of the goods or services to which the contract relates. Conclusion The last term of the contract between davina and B&F would be considered unfair as B&f holds no responsibility for the losses as the first two clauses in the contract excluding our client's liability and the last term causes the significant imbalance in the both parties' rights and obligations arising under the contract conclusively it can be argued that davina cannot claim for the damages and B&F are not liable. Reference Abbot, k. Pendlebury, N. Wardman, k (2002) Business Law (7TH), Hampshire, Ashford colour press K, David. Holmes, A Hayward,R (2005) Business Law(5TH), Wiltshire, Antony Rowe Limited Keenan, D (2004) English Law (14TH), Tottenham, Stone Serif Internet www.Oft.gov.uk www.Lawcom.gov.uk www.Out-law.com ?? ?? ?? ?? ...read more.