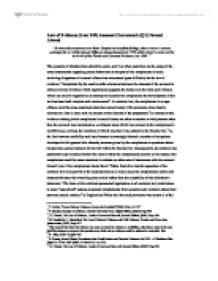 Law of Evidence (Law 249) Assessed Coursework (Q1) Naveed Ahmed "It seems that memories are short. Despite its manifest failings, there is now a certain nostalgia for s.2 of the Sexual Offences (Amendment) Act 1976 whilst vitriol is reserved for ss.41-43 of the Youth and Criminal Evidence Act 1999." 1 The question of whether there should be some, and if so what restriction on the scope of the cross-examination regarding sexual behaviour on the part of the complainant in trials involving allegations of a sexual offence has occasioned great difficulty for the law of evidence.2 Precipitated by the need to strike a balance between the interests of the accused to adduce relevant evidence which legitimately supports the defence on the facts and evidence which can only be regarded as an attempt to discredit the complainant the development of the law has been both complex and controversial.3 At common law, the complainant in a rape offence could be cross-examined about her sexual history if the questions were directly relevant to a fact in issue such as consent or the identity of the perpetrator.4 In contrast to this evidence relating to the complainant's sexual history on other occasions or with persons other than the accused was considered as a collateral issue which was relevant to the complainant's credibility as a witness the corollary of which was that it was subject to the finality rule.5 As the line between credibility and issue became increasingly blurred a number of exceptions developed to this general rule whereby answers given by the complainant to questions about her previous sexual conduct did not fall within the finality rule. Consequently, the defence was permitted to put evidence before the court to rebut the complainants answer so for instance the complainant could be cross examined in relation to other acts of intercourse with the accused himself even if the complainant denied them.6 Taken from this vista the operation of the common law rules proved to be unsatisfactory as in many cases the ...read more.

Section 41(4) aims to protect the complainant further by prohibiting evidence from being adduced or questions being asked where the purpose is to merely to impugn or attack the credibility of the complainant. The restriction imposed by section 41(1) may be lifted where the court grants leave under section 41(2). Leave will only be granted where the judge is satisfied that section 41(3) or section 41(5) applies and that a refusal might render as unsafe a conclusion of the jury or the court on any "relevant issue" as per section 41(2) (b). It is apparent that section 41 adopts a "categories" approach in that it establishes a rule of exclusion coupled with exceptions to it set out in fixed categories. As "powerful criticism on both sides of the Atlantic has it, this is folly, as there is no sure way of foreseeing every eventuality; the myriad of actual contexts in which sexual history evidence might be sufficiently relevant."42 It is precisely for this reason that the application of section 41 and in particularly the exceptions established to the general prohibition of sexual history evidence have already caused difficulties. Section 41(3) establishes three situations in which evidence or questioning may be allowed the first of which is where the evidence or question relates to a relevant issue that "is not an issue of consent."43 The second exception to the general ban relates to "where the sexual behaviour of the complainant to which evidence or question relates is alleged to have taken place at or about the same time as the event which is the subject itself of the charge against the accused."44 Evidence put forward under this category will be relevant to the issue of consent. According to Dennis this provision is problematical for he asks "what are the temporal limits of the condition that the sexual behaviour took place at or about the same time as the event in question does this mean, minutes, hours or even weeks of the event?" ...read more.

and a narrow definition of credibility.73 Recent cases have shown the judiciary to be taking this restrictive interpretation of section 41 (4) and allowing a range of evidence to be permitted even where the complainant has argued that it is an attack on her credibility. Thus, in MH74 and RT 75 the Court of Appeal held that evidence of false complaints made by the complainant in the past was clearly relevant and that section 41(4) was no bar to receiving such evidence. Therefore to conclude, this paper has attempted delineate that whilst section 41 of the YJCEA is well intentioned as reform was clearly needed the new Act is inherently restrictive and has the potential to conflict with Article 6 of the ECHR. Although significant amounts of goodwill were expended by the House of Lords in A (No2) in trying to make a silk purse out of the new Act 76 it is my view that reform is required. This could be undertaken by following the approach adopted by the Scottish Parliament in the Sexual Offences (Procedure and Evidence) (Scotland) Act 2002. Although the Act like the YJCEA establishes a general prohibition on the introduction of sexual history evidence it does not adopt a closed categories approach in permitting the use of sexual history evidence preferring instead a discretionary approach whereby sexual history evidence can be admitted if it has significant probative value.77 This structured inclusionary discretion has important advantages for it avoids the conceptualisms and rigidity of the closed category model and also the principles for this discretion are sufficiently broad to permit compliance with Article 6.78 Importantly though it also "improves on the old section 2 of the Sexual Offences (Amendment) Act 1976 by shifting the focus from fairness to the defendant to the interests of the administration of justice more generally and by expressly declaring that the latter extend to consideration of the complaint's interests. ...read more.