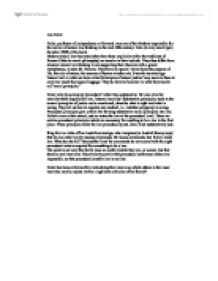 Lon Fuller Fuller, professor of Jurisprudence at Harvard, was one of the thinkers responsible for the revival of natural law thinking in the mid-20th century. Note (in very small type) the date (1969) of his book. Modern natural law theorists (other than those explicitly within the traditions of Roman Catholic moral philosophy) are secular in their outlook. They thus differ from classical natural law thinking in not supporting their theories with a grand metaphysics, as does St. Thomas. They have no special views about the purpose of life, the role of nature, the sources of human wisdom etc. Even the terminology 'natural law' or what we have called 'principles of natural justice' may seem to them to carry too much theological baggage. They do believe however in what they tend to call 'moral principles.' Fuller calls his principles 'procedural' rather than substantive. He also calls the morality that's required for law, 'internal morality.' Substantive principles, such as the several principles of justice we've mentioned, describe what is right and what is wrong. They tell us how to regulate our conduct, i.e., whether polygamy is wrong. Procedural principles give criteria for forming substantive moral principles into law. Fuller's view is that natural justice enters the law at the procedural level. There are certain procedural principles which are necessary for anything to be a law in the first place. These principles make the law procedurally just, even if not substantively just. King Rex is a take-off on Austin's sovereign, who imagines (as Austin's theory says) that he can make law by issuing commands. He issues commands, but fails to make law. Why doe she fail? Becausethe 'laws' he commands do not accord with the eight procedural criteria required for something to be a law. The point is not only that Rex's laws are unfair (which they are, or worse), but that they are not even laws. ...read more.

Moreover, the very desiderata comprising the Inner Morality of law can, and must, vary with external circumstances. Fuller's account of how retroactive laws may be justified (to resolve a failure in another desiderata, for instance) is a case in point. But, he concludes, referring back to the division of labour in the extended order; "to know how, under what circumstances, and in what balance these things should be achieved is no less an undertaking than being a lawgiver." [38] In the case of the "grudge informer" retroactive legislation can be justified in the attempt to restore respect for the law. Not only is this a swifter and surer approach than attempting to interpret Nazi statutes as to their legality at the time, or to argue that their very vagueness compels the rejection of such legislation, it also counters the unstated system of rules, imposed by the Party's terror in the streets and pressure on the judiciary, that existed without formal legislative enactment. It is useful at this point, however, to recall the arguments of the Marxist legal theorist, Pashukanis. Pashukanis suggested that there is just as much economic calculation, or evaluation of the consequences accruing from an action, in the moral sphere as there is in the economic sphere. [39] Thus, in bourgeois criminal law we find a table of crimes with a schedule of appropriate punishments or expiations - a kind of price list for misbehaviour. ... The legal subject is thus the legal counterpart of the economic trader. [40] Clearly, with no "price list for misbehaviour", it might naturally be assumed that no wrong was committed by the "grudge informers." But the heart of law is not dependent upon subjective calculations, i.e. the economics of marginal utility or its moral equivalent the morality of aspiration. The conception of acting man re-ordering his activities in accordance with his constant creation and revision of plans is incompatible with the requirements of the morality of duty sustaining society. ...read more.