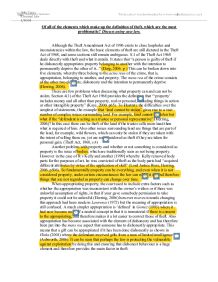 Of all of the elements which make up the definition of theft, which are the most problematic? Discuss using case law.

Of all of the elements which make up the definition of theft, which are the most problematic? Discuss using case law. Although the Theft Amendment Act of 1996 exists to close loopholes and inconsistencies within the law, the basic elements of theft are still dictated in the Theft Act of 1968, and some sections still remain ambiguous. S.1 of the Theft Act 1968 deals directly with theft and what it entails. It states that "a person is guilty of theft if he dishonestly appropriates property belonging to another with the intention to permanently deprive the other of it..." (Doig, 2006. p ) This can be broken down into five elements, whereby three belong to the actus reus of the crime, that is, appropriation, belonging to another, and property. The mens rea of the crime consists of the other two elements; dishonesty and the intention to permanently deprive (Herring, 2006). There are few problems when discussing what property can and can not be stolen. Section 4(1) of the Theft Act 1968 provides the definition that "'property' includes money and all other than property, real or personal, including things in action or other intangible property" (Kaye, 2000. ...read more.

They should therefore apply ordinary standards to the term. However there is a common law test that the jury will use as their basis for dishonest behaviour and that is set out in the Ghosh test which asks two questions. Firstly, was the defendant act dishonest according to the standards of reasonable people, and secondly, did the defendant realise that reasonable, honest people would regard his act as dishonest (Herring, 2006) If the answer to these questions is yes, then the defendant is dishonest, however it brings up the problem, that a jury of 12 people may all have different standards of honesty, and therefore the decisions could vary from case to case and this inconsistency would not be fair within the law. Also, dishonesty may seem obvious within some situations, but what about others such as cases involving business fraud, where the jury may need some assistance identifying the dishonesty. On the other hand, subjectivity can be problematic when it comes to theft as shown in Gilks (1972). It was suggested that if a person genuinely believes that they are not dishonest to take money given to him mistakenly by a bookmaker, then his belief makes him honest in his actions (Boone, 2006). ...read more.

Cases such as Llyod (1985) where a cinema employee took films, copied them and then returned the originals. There is no intent to permanently deprive however as Lord Lane CJ stated that "mere borrowing is never enough to constitute the necessary guilty mind unless the intention is to return the thing in such a changed state that it can truly be said that all its goodness or virtue has gone" (1988). So if some part of the property's value has decreased then this in itself qualifies as intention to permanently deprive. Of all of the elements which make up the definition of theft, one can see that they all become problematic in their own right. However we can see that appropriation and dishonesty are surprisingly the most difficult aspects of theft as appropriation does not necessarily lead to theft, yet it is regarded as important when convicting a person of the offence. Secondly, part of the mens rea, the dishonesty element is hugely subjective and is a key element in theft that is not defined in statute. The Ghosh test seeks a compromise between the subject and objective elements in theft yet even then it is not a reliable feature to have in court due to the ordinary dishonest juror approach. . ...read more.

Not a bad summary of the pertinent issues.

The author places too much reliance on academic journals to phrase particular sentences, and does not get beyond a summary of the basic case law.

Some alternative articles to consider are: