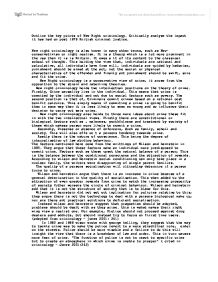 Outline the key points of New Right criminology. Critically analyse the impact it has had on post 1979 British criminal justice.

Outline the key points of New Right criminology. Critically analyse the impact it has had on post 1979 British criminal justice. New right criminology is also known in many other terms, such as Neo-conservativism or right realism. It is a theory which is a lot more prominent in the usa than it is is Britain. It owes a lt of its content to the classical school of thought. This holding the view that, individuals are rational and calculative, all individuals have free will, individuals are quided by hedonism, punishment should be aimed at the act, not the social or physical characteristics of the offender and finally ant punishment should be swift, sure and fit the crime. New Right criminology is a conservative view of crime, it arose from the opposition to the strain and labelling theories. New right criminology holds two intellectual positions on the thoery of crime. Firstly, Crime causality lies in the individual. This means that crime is commited by the individual and not due to social factors such as povery. The second position is that of, Criminals commit crimew based on a rational cost benifit calculus. This simply means if commiting a crime is going to benifit them in some way then it is less likely to seem so wrong and so influence their decision to carry out sais crime. New right criminology also holds to three more ideas about crime these fit in with the two intellectual views. ...read more.

This is effectivley an anti social behaviour act. The white paper focus's on: firstly people taking responsibility for their own actions, the community setting clear standads of behavoiur ( the police, local authorities and other enforcers taking swift effective action if they are breached), the perpetrators of anti social behaviour being held accountable for their actions, giving police more power to disperse groups of undesirables. ( adapted from the white paper march 2003) As you can see the anti social behaviour act closely follows the theory that underlines new right criminology. Going back to the speech in 2001 the prime minister promises a police reform, effectivley getting officers out of the station and back on the beat in their communities. This was a major point concerning wilson and hernsein. the police should take on a more traditional role, this is what labour in 2001 aimed to do. ' tough legislation, backed up by police on the streets - to reduce crime and anti social behaviour and reinforce peoples responsibility to society' ( tony Blair PM speech June 2001) Post 1979 criminiology would seem based on new right theories of crime, especially policies after 1997. This is becuase the labour party came into power after a long period of conservatism. The impact of new right criminology on the british criminal justice system since 1979 has had a varied effect on policies and programmes concerning crime since 1979. ...read more.

The differnce in 1997 was that government also had practical ideas to back up their policies, new labour were on to a winner. Reforms to the criminal justice system and policies concerning the community have greatly decreased the rate of crime. Although we cannot always trust official statistics labour do appeaer to be carrying out what they promosed. New labour policy on crime is not completly based on new right criminology, it uses the basics but goes on to improve it by finding ways of making it work in todays society, it would seem that the labour party make up for what new right criminology misses in its implication ofthe theory. In conclusion i feel that new right criminology lacks everything needed to make it work, the writtings of wilson clearly illistrate this point, his lack of research and depth make his ideas some what messy. Although wilson did write of ideas that todays government has sarted to impliment, the difference is that today we have practical ideas and ways to properly carry out what the new right theorists thought of. Society is more open to the ideas of the new right. The attitude of todays society is that of looking after yourself and the community around you, a policy which agrees with this and is backed up by good theory is one which society will welcome. Changing patterns and attitudes of society will determine how best to deal with its problems and which theories to follow. ...read more.