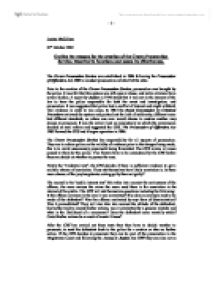 Outline the reasons for the creation of the Crown Prosecution Service. Describe its functions and assess its effectiveness.

Louise McCallum 01st October 2002 Outline the reasons for the creation of the Crown Prosecution Service. Describe its functions and assess its effectiveness. The Crown Prosecution Service was established in 1986 following the Prosecution of Offenders Act 1985 to conduct prosecution on behalf of the state. Prior to the creation of the Crown Prosecution Service, prosecution was brought by the police. It was felt that this system was left open to abuse, and led to criticism from several bodies. A report by Justice in 1970 stated that it was not in the interest of the law to have the police responsible for both the arrest and investigation, and prosecution. It was suggested that police had a conflict of interest and might withhold vital evidence in order to win cases. In 1981 the Royal Commission on Criminal Procedure reviewed the system and pointed out the lack of uniformity, different areas had different standards, so where one area would choose to caution another may choose to prosecute. It was the overall lack on consistency on which the commission decided on total reform and suggested the CPS. The Prosecution of Offenders Act 1985 formed the CPS and it began operation in 1986. ...read more.

Some news papers reported that due to the lack of staff it led to missing files and possibly lost cases. January 2001 brought about the biggest cash boost for the CPS since it began 14 years previous. It is believed that this should put an end to the criticism as staffing shouldn't be a problem in the future. By October 2001 the CPS, Lord Chancellor's Department, the Bar Council and the Law Society had developed a scheme to allow prosecution barristers and defence barristers to be paid equally. Sir David Calvert-Smith QC hopes this "will attract many more first-class advocates to prosecution work". The major criticism the CPS has been dealing with since its creation is the number of discontinued cases. About 12% of cases are discontinued each year but the CPS defend this by saying that it is effective filtering. As a result there have been instances where private prosecutions have been brought for serious claims such as anonymous V's Davies 1995, where the CPS declined to prosecute Christopher Davies for the alleged rape of two prostitutes, but after a private court case he was found guilty and sentenced to 14 years imprisonment. The Glidewell report 1998 found that the number of judge ordered acquittals made up over 20% of all acquittals. ...read more.

The CPS claim to be meeting targets set by the government and since the re-structure in 1999 "areas have worked to raise public profile of the service within their local communities". Since the implementations of the changes discussed in the Narey Report the pilot areas are showing a 7% discontinuance rate while the national average is 12%, once criminal justice units are placed nation wide the figure for discontinuing cases should drop to the 5-7% mark. In 2001 98.3% of hearings in the Magistrates Court resulted in a conviction, 87.9% of hearing in the Crown Court resulted in the same. The figures published in 2001 by the DPP, Sir David Calvert-Smith QC still leave room for improvement but with constant targets and continuing funds the CPS may within time be able to meet it own vision: "To be a prosecuting authority of stature, providing the best possible service to society. We want to be a professional organisation which values all its people, performs to a high standard, inspires pride, and works in partnership." Source of material used * www.cps.gov.uk * The Crown Prosecution Service annual report 2000-2001 * www.thetimes.co.uk/law * The English Legal System by Jacqueline Martin * The complete A-Z Law Handbook by Jacqueline Martin * New Law Journal - June 12 1998 * Handouts received in class ?? ?? ?? ?? - 1 - ...read more.