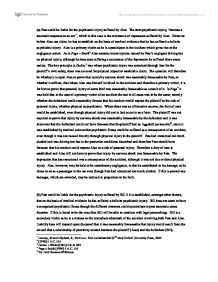 (a) Pete could be liable for the psychiatric injury suffered by Alan. The term psychiatric injury, 'denotes a traumatic response to an act'1, which in this case is the recurrence of depression suffered by Alan. However before Alan can claim, he has to establish on the basis of medical evidence that he has suffered a definite psychiatric injury. Alan is a primary victim as he is a participant in the incident which gives rise to the negligence action. As in Page v Smith2 Alan sustains minor injuries caused by Pete's negligent driving but no physical injury, although he does start suffering a recurrence of the depression he suffered three years earlier. The key principle in Dulieu3 was where psychiatric injury was sustained through fear for the plaintiff's own safety, there was no need for physical impact to establish a claim. The question will therefore be whether it is upon Alan to prove that injury by nervous shock was reasonably foreseeable by Pete, or whether it suffices, that where Alan was himself involved in the accident and therefore a primary victim, it is for him to prove that personal injury of some kind was reasonably foreseeable as a result of it. In Page4 it was held that in the case of a primary victim of an accident the test in all cases was to be the same; namely whether the defendant could reasonably foresee that his conduct would expose the plaintiff to the risk of personal injury, whether physical or psychiatric. ...read more.

Therefore it will not be sufficient to be told of the event by a third party. Bill has the proximity of time and space and perception as he heard the crash and came to immediate assistance, however he does not have the necessary proximity of a relationship with Pete. Nevertheless in Alcock9 per Curiam stated that 'the class of persons to whom a duty may be owed to take reasonable care to avoid inflicting psychiatric injury through nervous shock sustained by reason of psychiatric injury or peril to another is not limited by reference to particular relationships such as husband and wife or parent and child thought it must be within the defendant's contemplation'. Therefore, liability will depend on the closeness of the relationship between Bill and Alan with the burden on Bill to prove such a criteria. It is unlikely that Bill will be able to prove such a relationship. If it is established that Bill is a rescuer and more than a mere bystander, then he will be treated as a primary victim.10 Liability for nervous shock was extended to rescuers in Chadwick11, which also stated that a relationship with any one of the victims was not relevant to a claim. However Bill is an off-duty fireman, so it may be argued that he is not a rescuer in the sense of 'Chadwick'. ...read more.

Two factors are essential, the first is that there is an injury to health (as distinct from occupational stress) which then secondarily is attributable to stress at work (as distinct from other factors).20 Factors which will be taken into account are the nature and extent of work done by Carol and whether there have been any signs from Carol of impending harm to health, which Bolchester Hospital as her employer should have reasonably realised and done something about. Carol did not tell Bolchester Hospital about the stress and pressure she felt she was under, however it may be argued that Bolchester should have reasonably foreseen this due to the nature and extent of the excessively long hours they have been placing on their employees due to staff shortages. Even if this is not so, Bolchester do not provide a counselling service for their staff which in such a demanding job may be a breach of duty to employees. However, the psychiatrist has suggested that her depression and anxiety may be the cause of the trauma of seeing Pete, but also by the stress of trying to cope with her job. Where the harm suffered has more than one cause, the employer should only pay for that proportion of the harm suffered which is attributable to his wrongdoing, unless the harm is truly indivisible. It will be for Bolchester Hospital to raise the question of apportionment. ...read more.