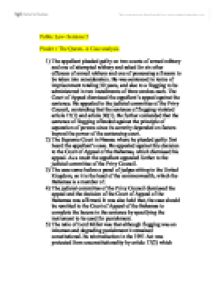 Public Law- Seminar 5 Pinder v The Queen- A Case analysis 1) The appellant pleaded guilty on two counts of armed robbery and one of attempted robbery and asked for six other offences of armed robbery and one of possessing a firearm to be taken into consideration. He was sentenced to terms of imprisonment totaling 30 years, and also to a flogging to be administered in two installments of three strokes each. The Court of Appeal dismissed the appellant's appeal against the sentence. He appealed to the judicial committee of the Privy Council, contending that the sentence of flogging violated article 17(1) and article 30(1). He further contended that the sentence of flogging offended against the principle of separation of powers since its severity depended on factors beyond the power of the sentencing court. 2) The Supreme Court in Nassau where he pleaded guilty first heard the appellant's case. He appealed against this decision to the Court of Appeal of the Bahamas, which dismissed his appeal. As a result the appellant appealed further to the judicial committee of the Privy Council. ...read more.

6) It is often remarked that the severity of the punishment is beyond judicial control and that it falls within the scope of the executive. But, under the 1991 Act all the factors bearing on the severity of corporal punishment which were capable of being prescribed in advance had so far as possible been laid down by the legislature or entrusted to the judiciary. The provision in section 4(2) that says that the pattern of the instrument used for flogging was to be approved by the Governor General was a delegated legislative power of general application, which did not affect the severity of punishment in any particular case and therefore did not offend against the separation of powers. In the words of Lord Millet "The punishment was ultimately subject to judicial control and involves no transfer to the executive a power that ought to be exercised by the judiciary." Thus the principle of separation of powers plays a very passive role in this case. ...read more.

9) There are definite rhetorical differences between the majority and the minority judgments. The majority judges believe that one has to interpret the constitution by "carefully considering" the language used in it and that the court should not read its own moral values into the constitution. The minority argues that a literal interpretation should give way to a narrower purposive interpretation of the constitution. The minority claims that the constitution framers did not intend that a form of inhuman punishment once abolished, could lawfully be reintroduced in the years that followed and that the liberty to do so was only to allow the transition from colonialism to sovereignty to proceed smoothly. The majority adopted an alternative line of thought and said that it would have been rational on the part of the constitution makers to hold such a view as the extent of punishment should be re considered by the legislature from time to time in the light of changing circumstances. These differences clearly reveal a difference in the understanding of the law. ...read more.