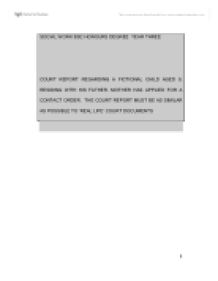 COURT REPORT REGARDING A FICTIONAL CHILD AGED 9, RESIDING WITH HIS FATHER. MOTHER HAS APPLIED FOR A CONTACT ORDER.  THE COURT REPORT MUST BE AS SIMILAR AS POSSIBLE TO ‘REAL LIFE’ COURT DOCUMENTS

This report has been prepared for the court and is strictly confidential.  It must not be shown to any person other than the named parties or a legal advisor to such parties.  Legal Advisors may use the report in conjunction for an application for legal aid.

Author of Report and relevant Qualifications/Experience

I, Sheileen Lavery, Student Social Worker of Newcounty Social Services declare that this report is truthful and I make it knowing it may be placed before the court (Family Proceedings Rules 1991).

This report is based on my experience as a Student Social Worker since September 2005.  I am currently in the final year of a BSC (Hons) Degree in Social Work (University of Ulster), and to date have undertaken an eighty day placement with a Child and Family Team in Craigavon and Banbridge Trust.

PURPOSE OF REPORT AND REASON FOR APPLICATION

1999 Dec – Respondent treated for superficial head cuts in A & E

2002 April - The marriage breaks down, applicant leaves the family home

ARTICLE 3(3) sets out the Welfare Checklist as follows:

The ascertainable wishes and feelings of the child concerned

The physical, emotional and educational needs of Ben

The likely effect on Ben of any change in circumstances

Any harm which he has suffered or is at risk of suffering.

The child’s age, sex, background and any characteristics of which the court considers relevant

Range ofPowers available to the court

Grant a supervised Contact Order for an interim trial period

"The Court reiterates that in judicial decisions where the rights under article 8 (of the Convention) of parents and those of a child are at stake the child's rights must be the paramount consideration. If any balancing of interest is necessary the interest of the child must prevail."