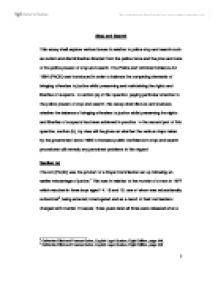 Stop and Search This essay shall explore various issues in relation to police stop and search such as racism and discrimination directed from the police force and the pros and cons of the police powers of stop and search. The Police and Criminal Evidence Act 1984 (PACE) was introduced in order to balance the competing demands of bringing offenders to justice whilst preserving and maintaining the rights and liberties of suspects. In section (a) of this question, paying particular attention to the police powers of stop and search, this essay shall discuss and evaluate whether the balance of bringing offenders to justice whilst preserving the rights and liberties of suspects has been achieved in practice. In the second part of this question, section (b), my view will be given on whether the various steps taken by the government since 1999 to increase public confidence in stop and search procedures will remedy any perceived problems in this regard. Section (a) The Act (PACE) was the product of a Royal Commission set up following an earlier miscarriage of justice.1 This was in relation to the murder of a man in 1977 which resulted in three boys aged 14, 15 and 18, one of whom was educationally subnormal2, being arrested, interrogated and as a result of their confessions charged with murder. However, three years later all three were released after a report into the case (Fisher Report) ...read more.

This section of the essay shall consider the various steps taken by the government since 1999 to increase public confidence in stop and search procedures and how, if at all, they remedy any perceived problems in this regard. One of the main pieces of legislation brought in after 1999 in relation to stop and search is The Police Reform Act 2002. This act introduced Police Community Support Officers. As a Police Community Support Officer (PCSO) you will support the work of your local police force and provide a visible and reassuring presence on the streets. It is a paid role, although you won't have the same powers as a regular officer.12 Under The Police Reform Act 2002, PCSO's have the power to stop and search pedestrians and vehicles as well as various other powers. It is fairly simple to become a PCSO and the requirements are basic. The only qualifications required for the post are that the chief officer is satisfied the person is suitable, capable and has been adequately trained.13 This means that near enough anyone can become a PCSO and have the power to stop and search. By empowering the people with this, public confidence is likely to rise. This is because it is no longer just police officers who have the power to do so, but any civilian can also be trained and given the power to stop and search, including those stopped and searched by the police. ...read more.

which require reasonable suspicion.18 There are clearly potential dangers in granting wide stop and search powers to the police if there is a possibility that the powers will be abused, with harassment of ethnic minority groups being a particular concern.19 Public confidence in stop and search procedures vary depending on who you are. As I have explained, black and Asians, men especially, are more likely to have a negative view of stop and search procedures despite the measures brought in to increase overall confidence. Those living in London would especially have a lack of confidence in the police as this area has the highest concentration of stop and searches due to high levels of criminal activity and it being the most likely target in the UK for terrorist attacks. Whereas white people are more likely to have confidence in the police force as there is no obvious discrimination against them whereas we often read in the newspapers of alleged police discrimination against ethnic minorities. Even the most productive and innovative ideas brought in by the government are unlikely to remedy perceived problems as it is difficult to change peoples opinions and views. The steps taken by the government have had little effect so far; however it takes time for such an effect to occur. The Metropolitan police force is constantly trying to recruit more ethnic minority officers in an attempt to boost relations and to put a stop to the view that the police force is institutionally racist. ...read more.