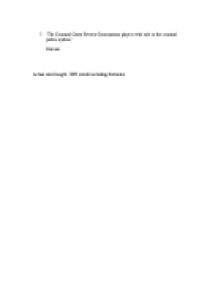 ﻿1. ?The Criminal Cases Review Commission plays a vital role in the criminal justice system.? Discuss. Actual word length: 2099 words including footnotes. ________________ The criminal justice system aims to deliver a fair justice process for the public and aspire to convict the guilty and acquit the innocent. This aspiration however strikes in contrast to reality. The human courts are fallible that commit mistakes and innocent people do get convicted (Naughton, 2007:20). The Criminal Cases Review Commission (CCRC), an independent public body, aims to act as an additional safeguard to the appeal system and review possible miscarriages of justices.[1] The CCRC, however, has been ineffective and does not play a vital role. This essay will discuss on the reasons why the CCRC fails to play a vital role. Reasons include the procedural framework, way of investigation, long waiting time before a decision is reached and its establishment leading to misguided perception of the system. There are several definitions of miscarriage of justice but in this discussion, we will use the laymen?s term ? to acquit the innocent and convict the guilty. First, the limitation on the CCRC?s power to refer has resulted it in not playing a vital role. ...read more.

Although the rule of law is an ideal, granting an exception would break down the system of principle. The tension between CCRC and CA is also prevalent. The CCRC was severely criticised by CA on referring case of Knighton and Ruth Ellis as wasting the court?s time ?which was entirely without merit?, causing CCRC to be more cautious when referring (Skelly, 2012:460). But it is worth noting that these cases are long-past alleged wrong cases (Campbell, 2010). Nonetheless, it is undeniable that the presence of section 13 prevents CCRC from placing its emphasis on whether the accused actually committed the crime. The CCRC was established to supplement the CA and not act as deference to it. Eady and Price (2010:2) also noted that the ?due process should not be an infallible representation of fairness?. By failing to focus on the purpose it was set up for, it clearly seems that the CCRC has failed its duty to ensure that the innocent should not be wrongly convicted and to play a vital role. Secondly, the investigations taken by the CCRC are not as thorough as envisioned by RCCJ and JUSTICE. ...read more.

of Criminal Appeal Act 1995 since it was established in 1997 (Taylor, 2012:1920). The reason in 2013/14 being that CCRC has ?no cause? to use it but this is questionable (CCRC Annual Report, 2014:26). There will definitely be cases where there is a strong need to recommend to uphold justice when the factually innocent lacks the necessary legal grounds to bring a case. In conclusion, it is indisputable that the CCRC does not play a vital role. Had it focused on overturning convictions of the factually innocent and not emulate the standards of CA, it would have played a vital role as it would be a real safe gate for the victims. Internal problems such as time delays and superficial investigations further suggest that the CCRC has failed to do so. As Maddocks (2014:25) said, every case is a personal human tragedy and the impact on the victim and his family are irreparable. The CCRC should continue to do more and change its framework to serve its original purpose it was established for and properly use its available power. On the whole, the CCRC might have helped some factually innocent victims to overturn their cases, but it has definitely not played a vital role. ...read more.