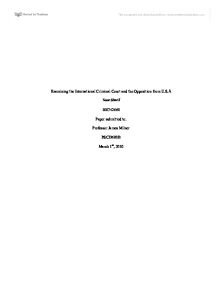 The United States Reluctance to abide by International Law

Examining the International Criminal Court and the Opposition from U.S.� Noor Sharif 100742660 Paper submitted to: Professor James Milner PSCI3600B March 1st, 2010 INTRODUCTION The International Criminal Court (ICC) was established on the 17th of July, 1998, through the adoption of the Rome Statute of the International Criminal Court1. The Court came into fruition in July of 2002 by obtaining the required signatures from 60 different nations from around the world2. The function of the ICC is to try and punish individuals who have committed the most serious crimes against humanity and have violated human rights3. It is designed to bring to justice the criminals who have avoided the eye of the law as a result of their national justice system failing at the task. The ICC is an independent international court with its own legal capacity, created and governed by its own treaty. It is not administered by, nor paid for through the U.N., rather, it is financed by, and accountable to only those states that have chosen to ratify the ICC Statute4. The power and jurisdiction of the ICC is granted by the Rome Statute of the International Criminal Court. The Rome Statute is an international treaty, binding only those countries which formally express the consent to be bound by its provisions5.Another purpose of the court is to give future victims of aforementioned crimes some reassurance in knowing that leaders who do commit these crimes will be brought to justice6. Although the ICC is not an organ of the U.N., the U.N. still has the power to refer individuals to the ICC7. Since its birth in 1998 however, the ICC has encountered much resistance from certain countries such as the U.S.A. This essay will examine why a country like the United States, being a committing member of the UN and being part of the P-5 would oppose participating and accepting the ICC as a legitimate source of international justice. ...read more.

The establishment of the court is still a gift of hope to future generations, and a giant step forward in the march towards universal human rights and the rule of law31. Some of the limitations or lack of 'far reaching powers' of the ICC, which Kofi Annan may be referring to, include Article 31 of the Rome Statute, which outlines the grounds available to the defence to avoid criminal responsibility. The defences listed are insanity, intoxication, duress, and self-defence32.These defences enable the accused to defend their actions in committing the most heinous crimes. Some may argue that it is absurd for the accused to have avenues such as these that enable them to defend their actions. However, the defences set out in Article 31, which gives grounds to exclude criminal responsibility, are not concerned with producing a loophole for criminals to escape conviction, rather, are concerned with the principles of crime; namely mens' rea(intent)33. For example, duress involves the suppression of one's freedom of choice, and therefore, the intent of the accused becomes a big question when hearing a case where the accused has come under duress34. There appears to be justification for Article 31 to have been included in the Rome Statute. Without it, it would be unfair to the accused, and every defendant, no matter how heinous the crime, deserves basic human rights which include the ability to defend their actions. Article 31 provides the necessary balance 'required for human justice'35. These provisions are unlikely to impact on the effectiveness of the ICC, as the accused would have to show mitigating factors in order to be found non-culpable for their actions. The ICC is a jurisdiction which does not act retroactively, and therefore, any atrocities which took place prior to the commencement of the Rome Statute (July 1st, 2002) can't be dealt with by the ICC. This restricts the ICC from dealing with any matters occurring before July of 2002. ...read more.

The main fear of the U.S. is that the ICC's power will be taken advantage of, and the organization will become somewhat of a totalitarian entity58. Additionally, they argue that the ICC is contradictory to U.S. foreign policy. Considering the ICC's independence, the United States also disputes that the ICC threatens their sovereignty, because obliging to the statute would give the ICC the authority to intervene in American domestic affairs wherever the ICC wanted. The U.S. government further contends that the ICC may be politically motivated against the leaders of the country and it's military.59 For example, ratifying and complying with the ICC would entail the ICC, instead of the U.S., of having the job of investigating the case against the soldiers accused of abusing Iraqi prisoners at Guantanamo Bay. This would've resulted in a deeper investigation, and possibly even more punishments for those soldiers who were found guilty60. CONCLUSION Upon evaluation of the ICC's jurisdiction and function, there appear to be areas which could be improved by implementing more "far reaching powers". However, the jurisdiction of the ICC reflects the reality of political compromise and it should be congratulated on its ability to combine varying nations' rules of law in the creation of a universal court. Yet, it is such vehement opposition from nations such as the U.S. which undermine international law. It seems that such opposition is in fact contradictory, as the U.S. is opposed to the ICC, yet they themselves are acting and intervening where the ICC naturally would. U.S. opposition to the ICC, it seems, is based merely on the fact that signing and ratifying the Roman Treaty would prevent them from continuing crimes of their own, such as the invasion of Iraq, hence putting their own national interests ahead of international harmony. Although there is a change of treatment and perception of the ICC by the Obama government, the international community is yet to witness actual changes from negative to positive. In order for international law to be truly effective on a worldwide scale, it requires both the support and the co-operation of states and governments alike. ...read more.