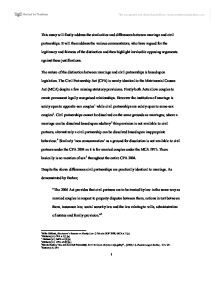 This essay will firstly address the similarities and differences between marriage and civil partnerships. It will then address the various commentators, who have argued for the legitimacy and fairness of the distinction and then highlight invaluable oppos

This essay will firstly address the similarities and differences between marriage and civil partnerships. It will then address the various commentators, who have argued for the legitimacy and fairness of the distinction and then highlight invaluable opposing arguments against these justifications. The nature of the distinction between marriage and civil partnerships is based upon legislation. The Civil Partnership Act (CPA) is nearly identical to the Matrimonial Causes Act (MCA) despite a few missing statutory provisions. Firstly both Acts allow couples to create permanent legally recognised relationships. However the institution of marriage is solely open to opposite-sex couples1 while civil partnerships are solely open to same-sex couples2. Civil partnerships cannot be dissolved on the same grounds as marriages; where a marriage can be dissolved based upon adultery3 this provision is not available to civil partners, alternatively a civil partnership can be dissolved based upon inappropriate behaviour.4 Similarly 'non consummation' as a ground for dissolution is not available to civil partners under the CPA 2004 as it is for married couples under the MCA 1973. There basically is no mention of sex5 throughout the entire CPA 2004. Despite the above differences civil partnerships are practically identical to marriage. ...read more.

Commentators of the Christian Institute add to this concept by arguing that the Governments enactment of the CPA 2004 will enforce a moral change within society and undoubtedly change people's attitudes towards same-sex marriage in the UK.22 However Beresford et al argues that other countries such as Canada, 'no longer require marriage to fulfil a unique status in order to fulfil the interests of society.'23This outlines the irrelevance of the Governments need to gradually allow same-sex couples to marry. What invalidates these propositions for the legitimacy of the distinction is the allowance of same-sex marriage by other countries such as the Netherlands, Canada, Belgium and Spain24. Beresford et al assert that the inequality of same-sex couples as opposed to opposite sex couples lies within the enactment of the CPA 2004 itself; Beresford et al outline that as countries such as Canada have allowed same-sex marriage, the UK's denial of their entry represents an inequality.25 They also state that the existence of the CPA 2004 is a form of '...sexual apartheid...' rendering same-sex couples as "second best."26 Beresford et al highlight pressure groups such as Outrage who argued that the separate statute, 'entrenches inequality' and is discriminatory to same-sex couples. ...read more.