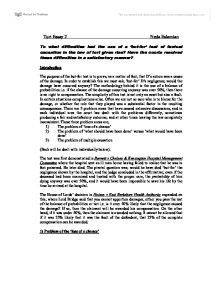 To what difficulties had the use of a 'but-for' test of factual causation in the law of tort given rise? Have the courts resolved these difficulties in a satisfactory manner?

Tort Essay 2 Neda Eslamian To what difficulties had the use of a 'but-for' test of factual causation in the law of tort given rise? Have the courts resolved these difficulties in a satisfactory manner? Introduction The purpose of the but-for test is to prove, as a matter of fact, that D's action was a cause of the damage. In order to establish this we must ask; 'but-for' D's negligence, would the damage have occurred anyway? The methodology behind it is the use of a balance of probabilities i.e. if the chance of the damage occurring anyway was over 50%, then there is no right to compensation. The simplicity of this test is not only an asset but also a fault. In certain situations complications arise. Often we are not so sure who is to blame for the damage, or whether the role that they played was a substantial factor in the resulting consequences. There are 3 problem areas that have caused extensive discussions, and in each individual area the court has dealt with the problems differently, sometimes producing a fair and satisfactory outcome, and at other times leaving the law completely inconsistent. These three problem areas are; 1) The problem of 'loss of a chance' 2) The problem of 'what should have been done' versus 'what would have been done' 3) The problem of multiple causation (Each will be dealt with individually below). The test was first demonstrated in Barnett v Chelsea & Kensington Hospital Management Committee where the hospital sent an ill man home having failed to realise that he was in fact poisoned. ...read more.

But in some cases the defendant goes on to say that even if they did not act negligently, then the outcome would have been the same as if they did act negligently. Thus the negligence would not have made a difference to the damages, and so the defendant would argue that there are no grounds for compensation. This occurred in Bolitho where the defendant's negligence was that she did not respond to her pager in time, therefore a patient of hers died. The only way to save the patient was to insert a tube into her throat, which the defendant would not have done, even if she had responded in time to her pager. Where the but-for test would result in no compensation (since had she not been negligent, the damages would have occurred anyway), the House of Lords stated that this was not the end of the inquiry, and one should ask, what should she have done i.e. should she have inserted the tube? The outcome here is a lot fairer on the defendant. It prevents an outcome of no compensation being awarded for a doctor of insufficient medical knowledge. Therefore the courts have resolved a potential difficulty in the single-faceted nature of the 'but-for' test. 3) Problem of multiple causation This is where most of the complications arise, since we no longer have 2 different outcomes e.g. the damage being the result of the fall or the negligence of the medics. ...read more.

Thus we are left with 2 contradictory precedents. This is a serious deficiency in the law and is most definitely an unresolved problem that the courts have not dealt with satisfactorily. Conclusion One can see that this area of the law in general contains many problems and inconsistencies. The but-for test is too simple to deal with these problems. When discussing the loss of a chance, we were left with authority that gave more favourable outcomes to commercial cases than personal injury cases. Obviously this does not reflect well on the courts, and so one must argue that here the law is definitely unsatisfactory. My opinion is that the apportioning of damages should be permitted for the loss of a chance as explained above since claimants will prefer some compensation over none. Regarding situations where the defendant would have done something, even if they had not been negligent, that would have lead to the same damage that their negligence created, the courts have been fairer to the claimants. Their action will not fail where they have a doctor that would have made an incorrect or medically unethical decision had he not been negligent. Thus it can be said that the courts have resolved this particular difficulty in a satisfactory manner. Finally, where there are cases of multiple causes, the law is left in its most serious state of dissatisfaction. In fact the outcome is such that we have two precedents, one of which is the complete antithesis of the other. There is no doubt, that quite objectively, the courts have not resolved any difficulty here. 1 Similar case arose in Fitzgerald v Lane ?? ...read more.